Controlled explosion of the remains of Nelson’s Pillar in the small hours of March 14th, 1966. Photograph: Gordon Standing

Souvenir hunters were busy in the days after the explosion, taking away small pieces of Nelson’s Pillar.

March 1966. The Sixties are getting groovier. The war in Vietnam is intensifying.

Eleanor Rigby and 19th Nervous Breakdown are in the UK charts (though you won’t hear them very often on Ireland’s single national radio station, Radio Éireann).

“The big hitsville happening right now is the lithe, lissom linen kick like they’re swinging it at Bolger’s” reads a magazine ad for a clothes shop on North Earl Street. “Cool for chicks and hot for cats.”

Just around the corner from North Earl Street, at 1.32am on the morning of March 8th, a loud explosion echoes down an almost deserted O’Connell Street.

When the dust clears, it reveals a jagged 70ft stump where the 134ft Nelson Pillar, Dublin’s most famous landmark, has stood for the previous 157 years.

Nelson Pillar (or Nelson’s Pillar, or just the Pillar, as it’s known locally) is nearly gone.

Within a week, the remains of the structure will be removed by the Army in a further, “controlled” explosion which does far more damage than the original bomb did to shop windows and fittings along the street.

The destruction of Dublin’s most famous landmark has been carried out by members of a makeshift gang of socialist republicans, supposedly using gelignite stolen from a building company along with ammonal left over from the IRA’s 1950s Border campaign.

“Operation Humpty Dumpty”, as they call it, is intended to remove the most obvious remaining symbol of British rule from the capital in the run-up to the 50th anniversary of the Easter Rising.

The summary removal of the pillar, however, was received with some regret but plenty of humour.

“There were happy, smiling faces everywhere and witticisms like ‘poor old Nelson’ were greeted with roars of laughter.

“Even an American tourist who went around explaining everything to everyone was kindly received.”

Up Went Nelson, a folk song set to the tune of The Battle Hymn of the Republic and recorded days after the explosion, went to the top of the Irish charts and stayed there for four weeks.

The newspaper’s editorial writer was less amused, criticising the “tepid” response of minister for justice Brian Lenihan to this “coup in the heart of the capital city”. 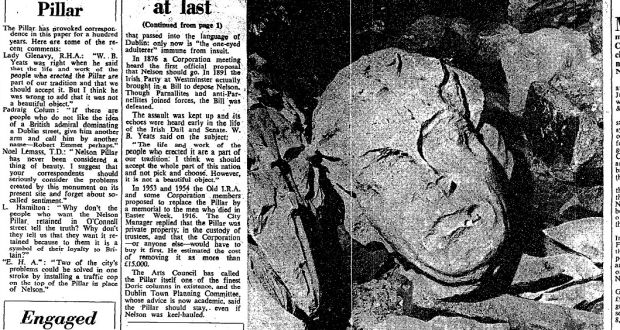 Gallery: The Irish Times from March, 1966

Owen Sheehy Skeffington told the Senate that “the man who destroyed the pillar made Dublin look more like Birmingham and less like an ancient city on the river Liffey”.

The pillar itself, erected in a flurry of enthusiasm after Nelson’s 1805 victory and death at the great naval battle of Trafalgar, was a powerful emblem of Dublin’s loyalty to the crown in the years immediately following the Act of Union.

A Doric column rising 121ft from the ground, it was topped by a 13ft-tall statue of the admiral in Portland stone by Cork sculptor Thomas Kirk.

It was designed by Francis Johnson, whose General Post Office would be added to the streetscape a few years later.

The original entrance to the pillar was underground, but GP Baxter designed a porch in 1894 to allow direct access from the street.

And, unlike its more recent replacement, you could climb up to a viewing platform at the top.

“It represents the feeling of Protestant Ireland for a man who helped break the power of Napoleon,” William Butler Yeats, who didn’t like it very much, said in 1923.

“The life and work of the people who erected it is a part of our tradition. I think we should accept the whole past of this nation, and not pick and choose.”

Not everyone agreed, but various attempts to remove the monument, or at least to replace the statue itself with a more congenial figure, failed, mostly due to the legal protections enjoyed by the trust responsible for the land on which it stood.

Thomas Bodkin, former director of the National Gallery, described it as “the focal point of our lovely city”.

Others thought it ponderous and clumsy, with its scale too large for its surroundings.

There were frequent complaints that it cast the surrounding streets into shadow, and was an impediment to traffic.

They may not have been aware of it, but the bombers were really only making their own contribution to the radical and hardly less brutal redefinition of Dublin’s streetscape which had already commenced with demolitions and new commercial developments across the city centre in the 1960s.

“With land value rising, can a city like Dublin – fighting for greater prosperity – afford to shore up at great cost houses which would not necessarily make efficient use of the land when renovated?” asked the London News in an article headed “Does anyone care for a noble city?” a month after the bombing.

“Do Dubliners anyway want to ensure the survival of a style which is associated in many minds with foreign rule?”

But photographs of the area around the Pillar in the mid-1960s – cinemas, restaurants and bustling shops where now there are derelict sites, closed department stores and fast-food joints – suggest a rather different story.

In the immediate aftermath of the bombing, the question of replacing the monument didn’t seem to be seriously considered.

“Now that the Pillar has gone the poverty of the statuary on view will be more than ever apparent,” another Irish Times editorial loftily observed, while holding out little hope that a replacement landmark would be built.

“In any event the cost of such things is now enormous; and if sculptors of international fame are employed – prohibitive.

“Moreover the reaction against representational likenesses makes every statue a source of ill-will and dispute.”

This proved prescient. No replacement was found for Nelson until the installation of the ill-fated Anna Livia monument as part of Dublin’s millennium celebrations in 1988.

And it took another 15 years before an appropriately non-representational likeness of nothing at all – the Spire – was devised to fill the space with something approximating the scale of the original.

Veteran Dublin republican Liam Sutcliffe was questioned by gardaí in 2000 after telling RTÉ radio he was one of those responsible.

He was released and the matter was taken no further.

In 2003, Sutcliffe was interviewed by Kitty Holland for The Irish Times to coincide with the official opening of the Spire.

He told her that: “The first attempt was on the last day of February but the bomb didn’t go off.

“So I had to go up on March 1st and remove it. I went into Clerys, bought a nail clippers and stripped it. I had a week then to drop it back.

“I went back on March 7th, had electrics in a briefcase. I connected everything up and placed it in an aperture – one of the windows at the top – that looked up Henry Street.

“I shook the hand of the man up guarding the platform and said “Cheerio”. He went off after his shift that night and the bomb went off at 1.32 in the morning. I had it timed for 2am but I had it on fast and it gained 28 minutes.”

Asked what he thought of the Spire, he said: “It looks like a great engineering job and a much better thing to have on the main street than an old foreign admiral with a broken arm and a missing leg.”