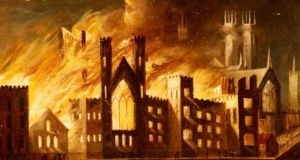 A contemporary painting by an unknown artist of the Palace of Westminster on fire in 1834. Copyright: Parliamentary Art Collection

There was no gunpowder involved on that occasion. The agent of destruction was fire, started deliberately, and innocently, in furnaces under the House of Lords. Even so, without meaning to, Furlong and an accomplice achieved what Fawkes and Company could not. By nightfall on October 16th, 1834, the Palace of Westminster was in ashes.

It wasn’t only buildings that were lost. Also consumed were a number of official measuring units, including the imperial yard. Indeed, in a sense, the fire did what not even latter-day British Eurosceptics could accuse Brussels of doing – destroy the pound (the imperial weight, that is). Yet Furlong – himself ironically named after an imperial unit – somehow escaped lasting opprobrium.

Maybe his obscurity stems from the official embarrassment that surrounded the fire’s origins. It began, after all, during the disposal of a centuries-old accumulation of “tally sticks”, crude accounting instruments from the early days of taxation.

The sticks – wooden IOUs, essentially – were long defunct, and taking up space in the bowels of parliament. Some had already been distributed to the poor for firewood, and that might have been the sensible way to get rid of the rest. But there was political sensitivity about their past, when they were also de facto currency. So the disposal was kept in-house, with disastrous results.

A contemporary account blamed the fire on “carelessness, that prolific parent of accident”. Less poetically, the cause was overworked furnaces, and chimney flues unswept for a year.

The job was supposed to be overseen by a Mr Whibley (in some versions Woebley), clerk of works, who devolved the task to two Board of Works labourers, the aforesaid Furlong and an Englishman named Cross.

Although it took them more than 10 hours, that was still too quick. Visitors to Westminster during the afternoon noticed that a stone floor beneath then was hot. Elsewhere, people trying to view the Armada tapestries found them obscured by smoke. By the time a panic could be organised, however, it was too late.

Charles Dickens was among the many who watched what became the city’s biggest blaze since the Great Fire of London itself. So was JM Turner, who would later paint it from memory. Another witness, the rising architect Charles Barry, viewed the scene with mixed emotions. It was a disaster, to be sure, but it was also a possible commission. Sure enough, he won the competition to design the replacement.

In the fire’s aftermath, some Fawkesian-style sabotage was suspected. But it was quickly concluded there was nothing to blame except incompetence, and with that the perpetrators faded from view.

That Furlong is remembered at all now is partly the work of Caroline Shenton, Westminster archivist and author of an acclaimed 2012 book, The Day Parliament Burned Down. And even as she revives his memory, happily from an Irish viewpoint, her researches tend to absolve Furlong – in part, anyway – at the expense of Cross.

The former was a first-generation emigrant who had walked from Liverpool to London in search of work, and found regular employment at Westminster, where he was considered a good, “steady” man. Cross was a former convict, knowingly re-employed, and then given the lead role in the tally-burning.

As well as winning several awards, Shenton’s book has had some unexpected effects. It brought her to the attention of a Cambridgeshire couple, Michael and Lesley Furlong. They already knew about an Irish ancestor called Patrick, formerly of Westminster. But only from the book did they learn of his dramatic intervention in British history.

Recently, they were Shenton’s guests on a visit to Westminster. Three generations of Furlongs attended. The youngest – nine-year-old Annie – has since narrated a commemorative video on her great-great-great-great-grandfather’s inadvertent achievement.

As for Shenton, she continues to bring history alive, even as we speak. A dedicated Twitter account @parliamentburns will today broadcast “live” details of the events of October 16th, 1834. Hot off the presses, as it were, and getting hotter every hour.