The final moments of the first World War

News of the Armistice on November 11th, 1918, was greeted with joy, disbelief and heartbreak 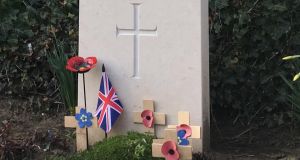 Private George Edwin Ellison was the last recorded British fatality of the war. He was 40, from Leeds, and left a widow and a four-year-old son.

At 5 am on November 11th, 1918, in a railway carriage at the forest of Compiègne outside Paris, an armistice was signed between the Allied forces and Germany. The Great War was over.

The terms stopped just short of demanding outright surrender by Germany; but they made it abundantly clear who was the victor and who was the vanquished.

Hostilities were scheduled to cease at 11am, a time chosen so all the units across the scattered battlefields could get the news. The timing was also symbolic – the 11th hour of the 11th day of the 11th month.

By that hour, Canadian forces had already captured the southern Belgian town of Mons. The Canadian Corps, the redoubtable warriors of Vimy Ridge, Passchendaele and so many other bloody scraps, drove the German occupiers from the city on the night of November 10th and the early hours of November 11th.

There is a grim symmetry to Mons for the British Empire. This is where the war begins and ends, not in the town itself but in an undulating road outside the village of Casteau. Here, there is a monument to the 4th Royal (Irish) Dragoon Guards, the Irish cavalry regiment that fired the first shot fired by a British soldier in the war.

Across the road, coincidentally, is a plaque to the 116th Canadian Infantry Battalion, which stopped at the very spot at 11am on Armistice Day.

Another Irish cavalry regiment completes this symmetry. The 5th Royal (Irish) Lancers was the last regiment to retreat following the Battle of Mons. This was the first encounter between the British and Germans in the war which occurred on August 23rd, 1914, and involved a heavily outnumbered and numerically tiny British Expeditionary Force (BEF) staging a fighting retreat southwards.

Now, more than four bloody years later, the 5th Lancers ended the war as cavalry scouts for the Canadian Corps.

Canadian commander Gen Arthur Currie understood the symbolism well. He asked the 5th Lancers to lead the victory parade and so 34 men on horseback from the regiment entered the Grand Place in Mons at the head of a vast procession, their pennons fluttering in a chilly breeze.

They were cheered with profound gratitude by locals who had endured the long years of German occupation.

The 5th Lancers was also one of the last British formations into battle. As the clock ticked down to the Armistice, a troop of lancers investigated a wood on the outskirts of Mons. As they did, they came under fire from German defenders who had not heard the war was over. Shots rang out and Private George Edwin Ellison was killed, the last recorded British fatality of the war.

It was the cruellest of luck. He had survived the entire war only to be felled by a stray bullet in the last moments of the conflict. He was 40, from Leeds, and left a widow and a four-year-old son.

The last Irishman to be killed in the first World War is uncertain. Tom Burnell’s definitive research on the Irish war dead, from what is now the Republic, lists 29 who died on the last day. Most of them died from illness or wounds.

Three men from Mayo fighting in the US Army were killed on Armistice Day. They were privates Michael Garvin from Newport, Patrick Murray from Doocastle and Michael Walsh from Manulla. Private Austin O’Hare from Kilfenora, Co Clare, was also killed. The US commander-in-chief Gen John Pershing faced years of allegations and a Congressional hearing that he threw away the lives of his men on the last day for no good reason.

A possible candidate for the last Irishman to be killed in the war is buried in Valenciennes (St Roch) Cemetery. Private Thomas Farrell was fatally injured on November 10th.

His faded gravestone states he died on November 12th, 1918. One can only imagine his family in Lucan rejoicing at the end of the Armistice and the agony of soul they must have felt on hearing the news he had been killed a day after it came into being.

News of the Armistice spread across the battlefields of Europe. The 16th (Irish) Division, unrecognisable from the overwhelmingly Irish nationalist force it had been and with just one Irish battalion remaining, found itself at 11am on Armistice Day on the exact site of the Battle of Fontenoy where the Irish Brigade had distinguished itself in the services of the French in 1745.

Men could scarcely believe that Germany, this redoubtable and ever resourceful foe, had finally surrendered.

Most were stunned by the news, hardly believing it had come to this after such a vast expanse of blood.

Capt Noel Drury of the Royal Dublin Fusiliers remembered: “It’s like when one heard of the death of a friend – a sort of forlorn feeling. I went along and read the order to the men, but they just stared at me and showed no enthusiasm at all. They all had the look of hounds whipped off just as they were about to kill.”

Serving nationalist MP Capt Stephen Gwynn prophetically worried about the reception the Irish serving at the front would receive on their return home.

“When the time came to rejoice over the war’s ending, was there anything more tragic than the position of men who had gone out by the thousands to confront the greatest military power ever known in history, who had fought the war, and won the war, and now looked at each other with doubtful eyes?”

In Ireland, as elsewhere, the news was greeted with profound relief. “The feelings that had been pent up for some years were suddenly let loose and the whole city seemed to go mad with joy,” The Irish Times reported of how Dublin greeted the news.

It went on to note the profusion of Union Jack flags around the city. By the afternoon, huge crowds had gathered from Sackville Street (O’Connell Street) to St Stephen’s Green. A group of students commandeered a hearse and put an effigy of the kaiser in the back wrapped in a “Sinn Féin flag” (presumably a tricolour).

Barely had the guns fallen silent though before the Armistice became contested memory. Republicans decided to stage a counter-demonstration in the middle of the reverie and fights broke out with ex-soldiers.

Armistice Day would go on being contentious. In 1924, an estimated 50,000 people turned out in College Green for the unveiling of the Guillemont Cross, which now stands outside the little French village captured by the 16th (Irish) Division in September 1916.

A year later, the commemorations in the city were disrupted by protesters who let off smoke bombs in protest at the decision of the Boundary Commission to maintain the status quo with regard to partition.

Armistice Day remained a day of raw emotion in Ireland irrespective of what opposition, both official and unofficial, there was to it. There was too much grief in too many households for it to be anything other than a sorrowful occasion.

As the years passed, memories of those who fought and died faded away. It was not until 1991 that an Irish president, in this case Mary Robinson, attended the Armistice Day commemoration service at St Patrick’s Cathedral in an official capacity.

Since then, there have been sincere attempts by successive governments to address what the historian FX Martin identified as the “national amnesia” regarding Ireland’s participation in the first World War.

The following Irishmen from what is today the Republic are listed by the British and US armed forces as having died on Armistice Day as a result of service in the first World War.

Ronan McGreevy is an Irish Times journalist and videographer. He is the author of the book Wherever the Firing Line Extends: Ireland and the Western Front, published by The History Press