From the archive: The distinctive and iconic design was removed by the station in 1995 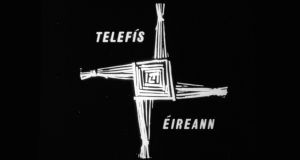 On August 28th, 1995, RTÉ unveiled a new logo, the details of which were reported on in The Irish Times the following day by Carol Coulter. “Saint Brigid’s cross has lost its place as a symbol of our national identity, well at least as far as our national broadcasting station is concerned,” Coulter wrote. “Yesterday RTÉ unveiled its new logo, to be revealed on the television screens of the nation this weekend, and, in due course, on everything associated with the station from vans to stationary. The new logo contains only the station’s initials, in blue, with the síneadh fada in green on the E. It is described by RTÉ as ‘a clean striking piece of modern design’.”

Objections were anticipated, and Coulter quoted Alan Pleass, RTÉ’s then head of design, reassuring people that the cross “would still be seen on many aspects of the house style ‘in a subtle yet distinctive manner’. On RTÉ stationary this takes the form of a faint blue shadow of a portion of the cross on the bottom half of the page. This reporter had to take it to the window to see it. However, Mr Pleass pointed out that this stationary had been printed essentially as a trial run to launch the new logo, and said that the tint was likely to be slightly deepened in the future. He rejected the suggestion that this was the beginning of the end of other religious imagery, like the Angelus. This was reiterated by a spokeswoman for RTÉ, who said there was ‘no need for alarm bells’.”

Brigid’s cross, although largely unknown outside of Ireland and the Irish diaspora, is one of our most iconic pieces of design. Like many Irish Christian saints, Brigid is a mash-up of pre-Christian or pagan figures and a subsequent Catholic co-option. The old school Brigid was one of the Tuatha Dé Danann associated with the beast of Imbolc. Both the design of and meanings attributed to the cross are probably pre-Christian, such as Brigid being a protector of cattle (which would chime somewhat with the beginning of spring), including the placing of a Brigid’s cross in a cowshed, and another use of the Brigid’s cross – protecting a house from fire. Even the design of the cross itself does not correlate to how Christian crosses are generally depicted, or even the old Celtic cross design.

A decade ago, on St Brigid’s Day 2010, Michael Parsons wrote in The Irish Times about a revival of St Brigid’s cross among a group of Kilkenny people including Margaret McGrath, a retired primary school teacher living in Boherkyle, outside Castlecomer. In the week running up to February 1st, “she and a group of fellow parishioners have been making thousands of St Brigid’s crosses for sale by volunteers to raise funds to pay for repairs to their local church”, Parsons reported.

“It took her ‘about five minutes’ to weave a cross from rushes collected by a local farmer who, she said, ‘it would be better not to name as he’d hate people to think his land was boggy’.” McGrath was “really sorry” that RTÉ had dropped the cross in their logo 15 years previously. Another tradition mentioned in the article was hanging a sheet or cloth from the window of a house on St Brigid’s Eve. This tradition takes other forms in other part of the country. In Tipperary, this tradition is ribín Bríghud, where a ribbon is hung out the window on St Brigid’s Eve, and then the following day used as a cure for headaches. Elsewhere in the country, such as in Donegal, this tradition is known as Bratóg Bríde, where a piece of material is often incorporated into the cross weaving itself.

Back to that RTÉ logo. The interpretation and inclusion of a St Brigid’s cross in the station’s logo design morphed over the years until it’s removal in 1995. In 1961, the cross in the logo was huge, with the words Telefís to the top left of the cross, and Éireann on the bottom left. In 1966, the logo was redesigned, with the cross to the left of the letters RTÉ, looking a little like a children’s windmill toy. By 1969, the cross was back embedded in the logo, this time linked with the letter “R”. In 1980, another redesign, this time with “RTÉ1” encased in an abstract cross.

In 1987, another new logo was presented – the ninth since 1961 – which placed a blocky gold Brigid’s cross above the “T” in RTÉ. The new design provoked such a reaction that the programme Mailbag dedicated an item to the logo change, including an interview with the then new head of public affairs, David Holden, in studio to defend the decision. “It’s really a matter of taste – people will always disagree with something in the area of design,” Holden said, before providing another Brigid’s cross nugget. “In some of the older houses around the country, the Brigid’s cross was used to date the building, and every St Brigid’s Day, a new St Brigid’s cross was made and put up in the rafters, so you could tell the age of the building by the number of crosses.”