Demonstration pays tribute to Irish language commissioner who has resigned 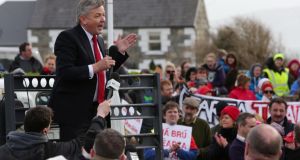 Irish language commissioner Seán Ó Cuirreáin speaking to the large crowd of people who came out yesterday to bid him farewell as he was vacating his office near Spiddal, Co Galway. Photograph: Joe O’Shaughnessy.

The Government’s failure to protect linguistic rights of Irish speakers was denounced in the State’s largest Gaeltacht yesterday, when hundreds of people braved southerly gales for a demonstration in Connemara.

The “Slán le Seán” protest, as it was titled, was held to mark the last day in office of the first Irish language commissioner Seán Ó Cuirreáin, who announced his resignation late last year over the State’s lack of commitment to providing adequate services in Irish for Irish speakers.

Yesterday’s event – coming just a week after an estimated 10,000 people marched in Dublin – is part of a nationwide campaign to seek equal treatment for Irish speakers on both sides of the Border.

Reiterating that they were “dearg le fearg”, or “red with anger”, the demonstrators, represented by Colm Mac Donncha of Tuismitheoirí na Gaeltachta, presented a letter of tribute to Mr Ó Cuirreáín at his office in An Spidéal.

Mr Ó Cuirreáin said he was humbled by the level of support from Gaeltacht communities and Irish speakers across the island. “I always found it to be ironic that the State, which requires all students to study Irish up to Leaving Certificate level, it then fails to facilitate them, and in fact actively prevents them from using that language in dealing with State bodies,” he said, emphasising that his recommendations had all been “cost neutral”.

“To continue to do this over the years and generations is a folly which has pushed the language to the margins of society,” he said.

A minute’s silence was held in memory of Éanna Griallais, a young man from Indreabhán who died over the weekend, before the participants then set out on foot from An Spidéal to Department of the Gaeltacht offices at Na Forbacha with banners and loud-hailers.

On arrival, actor and Fíbín theatre company producer Darach Ó Tuairisg read out a letter addressed to Minister of State Dinny McGinley, which was then presented to one of the department officials.

The letter calls for repeal or amendment of the Acht na Gaeltachta 2012 to ensure it sets the boundaries of the Gaeltacht according to linguistic criteria, and implementation of a clear policy throughout the Civil Service to ensure State services are provided through the medium of Irish.

Former Gaeltacht minister Éamon Ó Cuív and Sinn Féin senator Trevor Ó Clochartaigh were among politicians at the demonstration, along with representatives from communities across the Connemara Gaeltacht.