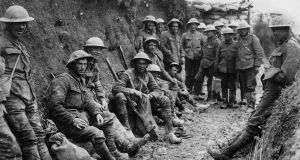 A total of 101 of the officers, privates and others from Tralee who died between 1914 and 1918 had served with the Munsters, while 125 served with other regiments and armies in the first World War. File photograph: Getty Images

Two large plaques with the names of the 226 Tralee men who died in the first World War have been unveiled at Ballymullen, Tralee, near the former headquarters of the Royal Munster Fusiliers and at either side of a simple stone memorial erected last year.

A total of 101 of the officers, privates and others from Tralee who died between 1914 and 1918 had served with the Munsters, while 125 served with other regiments and armies.

It is the first time their names have been publicly acknowledged in Tralee, a town which has strong republican roots but which also had a very strong British army tradition.

Mayor of Kerry Pat McCarthy (Fine Gael), who unveiled the plaques together with Independent councillor Sam Locke, said it was fitting it should be done in the year that also commemorated the 1916 Rising.

He paid tribute to Cllr Locke who had spearheaded the campaign.

Those Tralee men who had died had joined the army for employment reasons but also because of the vision of keeping small nations free , Mr McCarthy said.

McCarthy’s said his uncle had served in the second World War but felt he could never return to Kerry as he would not be welcome and this was very sad.

A colour party from the 12th Infantry Battalion, under the command of Comdt Brian Russell paraded from the military barracks at Ballymullen, which is now used by the Irish army.

Six sets of brothers from the area died in the conflict. These included three Murphy brothers, two of them members of the Royal Munster Fusiliers and one of the Australian infantry.

Three sets of Sullivan brothers died – two brothers in each family – and two Fitzmaurice brothers were killed a year apart along with two O’Shea brothers.

Prayers for peace and for those serving as soldiers were read throughout the ceremony by Rev Phyllis Jones of the Church of Ireland and parish priest of St John’s Tralee, Rev Seán Hanafin.

Mr Locke whose relative Albert Edward Locke was among the dead, said the monument erected last year was incomplete without the names.

Relatives of Tralee men who had served in the British army were among the gathering of about 170 at the ceremony.

Kay Walsh had with her the three medals of her grandfather Sgt Matthew Walsh who survived both the Boer War and first World War and went on to become a sergeant in the Irish Free State army.

“He died before I was born. I’ve done so much research, I feel I know him,” Ms Walsh said.

The research is ongoing and details of where the men had lived in Tralee – many of the streets have now disappeared or been renamed – as well as other information is being collated in a book to be placed in the local library.

Amy Schumer has made a docuseries about her pregnancy, a body in revolt
8

If the artist offends, should we pluck out their work?
9