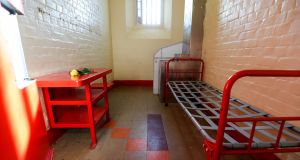 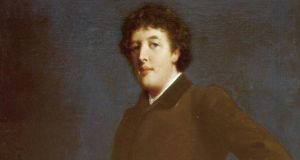 Portrait of Oscar Wilde: he was in Reading Gaol for two years between 1895 and 1897, sentenced to hard labour for “gross indecency”. Photograph: Tate Britain/PA Wire

The price was three times the median pre-auction estimate of £5,000.

A spokeswoman for Sotheby’s said afterwards that “the key was purchased by a private collector”, bidding via telephone, but would not reveal the geographic location of the buyer.

Wilde served two years in the prison in Reading, Berkshire in the south of England, between 1895 and 1897. He had been sentenced to hard labour for the crime of “gross indecency”.

Following his release, the Dublin-born writer went into exile in France and wrote his most famous poem, The Ballad of Reading Gaol, which was published under the pseudonym “C.3.3” – a reference to cell block C, landing 3, cell 3.

The key, mounted in a wooden presentation box, went under the hammer in Sotheby’s auction of English Literature-themed items in the New Bond Street saleroom in Mayfair, London. It was sold along with a framed statement from Leslie Portch, a former governor of HM Prison Reading, who said the key had been used for all cells in ‘C’ wing “and consequently would have been used to unlock C. 3-3 occupied by Oscar Wilde from November 19th 1895 to May 18th 1897”.

Reading Gaol closed in 2013, but Wilde’s old cell block is still standing. Earlier this year, during an arts festival at the site, the Irish novelist Colm Tóibín was temporarily locked into Wilde’s cell while he read aloud the letter that Wilde had written to his lover, Lord Alfred Douglas, which was later published as De Profundis.