No smoking guns: the 100-year controversy about what the ‘Lusitania’ was carrying

Germany claimed that a cargo of munitions made the Cunard liner a legitimate target for its U-boats, but the wreck’s owner, Gregg Bemis, says there’s no certain proof 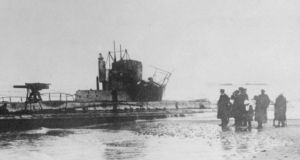 Sinker sunk: the wreck of U-20, the U-boat believed to have torpedoed the Lusitania off the Old Head of Kinsale. Photograph: Bain/Library of Congress 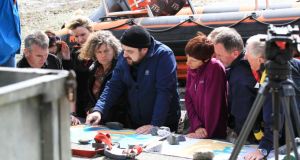 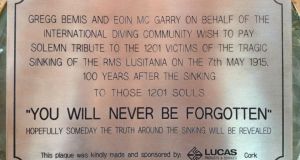 Memorial: the plaque that Gregg Bemis has commissioned to place on the wreck of the Lusitania. Photograph: Eoin McGarry

When Gregg Bemis, a US businessman, takes a boat to the Lusitania wreck site with Eoin McGarry, an Irish deep-sea diver, next week he will be carrying a stainless-steel capsule and plaque. The capsule holds the names of the 1,201 people who died when the ship sank, along with a flower. McGarry plans to put it on the liner’s hull, which lies 18km south of Kinsale, Co Cork, in about 90m (300ft) of water, on behalf of Bemis – the ship’s owner – and the international diving community.

“To those 1201 souls – ‘You will never be forgotten’ – Hopefully someday the truth around the sinking will be revealed,” the inscription reads, reflecting Bemis’s determination to establish what happened.

Half a century after the first serious dives to the wreck began – led by John Light, an American who had bought the wreck for £1,000 from the Liverpool & London War Risks Insurance Association – evidence of ammunition has been recovered, such as that found by Patrick Glavin and a team from Cork Sub Aqua Club in 2006. But Bemis argues that there is still no absolute proof that Lusitania was carrying the substantial munitions that Germany had said made it a legitimate target for U-boats.

As Eric Sauder recalls in his new book, The Unseen Lusitania: The Ship in Rare Illustrations, John Light’s first film of the wreck showed the hull to be in reasonably good condition.

Bemis, who is in his mid 80s, has descended to the wreck twice, first in 1993 and then in 2005. During the legal case he took here to establish full ownership of Lusitania, he read into the court record a letter from the British treasury. It informed Oceaneering International, a US company planning to dive in 1982, that no ammunition or explosives were on board – “but if its divers came across any they should be careful, because they still might be live”.

In 1993 a US oceanographer, Robert Ballard, discounted the armaments theory and attributed to coal dust the mysterious second explosion after Lusitania was torpedoed. Still, that wasn’t enough to put the theories to bed. Last year newly released British foreign-office files gave a new insight. They recorded significant concern about the potential diplomatic fallout from the 1982 Oceaneering expedition.

“Successive British governments have always maintained that there was no munitions on board the Lusitania (and that the Germans were therefore in the wrong to claim to the contrary as an excuse for sinking the ship),” the department’s North America head wrote in July 1982. “The facts are that there is a large amount of ammunition in the wreck, some of which is highly dangerous.”

The Irish reaction to a munitions find – specifically that of Charles Haughey, as taoiseach – is reflected in correspondence unearthed at the UK’s national archives by a University of Limerick postgraduate.

John Treacy, a former Naval Service officer, was researching maritime disputes between Ireland and Britain when he came across letters reflecting the same British diplomatic efforts. A reference to Sharelga, the Co Louth prawn trawler accidentally sunk by a British submarine in the Irish Sea in 1982, at the height of the Falklands conflict, jumped out at him.

In a handwritten note about Lusitania on a draft reply to Edward Oakden, a British diplomat, a legal adviser named Mrs A Glover wrote: “Assuming that the ship has sunk in international waters, there should, in normal circumstances, be nothing for the Irish Government to complain about. But it is possible that in the aftermath of the Sharelga incident, and in the present depressed state of relations, Mr Haughey might try to make an issue out of the affair, if explosives are found onboard.”

Treacy says, “The material, much of it being notes made before final drafts, suggests that great confusion existed across a number of British government departments.” In the event the officials could relax: the 1982 dive didn’t yield the expected smoking guns.

Bemis’s continued efforts to inspect the wreck, and get to the bottom of the munitions issue, among other things, have been frustrated by Ireland’s insistence on treating it as an archaeological site, he says. In 1995, when he was minister for arts, culture and the Gaeltacht, Michael D Higgins put an underwater heritage order on the wreck site, on the grounds that it was a war grave and of historical significance. Bemis successfully contested certain terms in a Supreme Court action in 2007.

Bemis says a forensic dive he had planned this year for the centenary could not go ahead, mainly because of “impossible” conditions he says the Department of Arts, Heritage and the Gaeltacht imposed. Central to his concerns are a request to indemnify the Minister, and the future of any fittings recovered; Bemis acknowledges that he does not own any personal possessions in the wreck.

The department says that “the conditions attached to Mr Bemis’s current dive licence, which runs to the end of 2015, are largely the same as earlier licenses he has obtained”. They “are also entirely consistent with a formal memorandum of understanding drawn up between Mr Bemis and the department in 2013 . . . This agreement, which was signed off by both sides in April 2013, had the specific objective of removing any uncertainty in relation to the State’s regulatory role and Mr Bemis’ plans for future research projects on the protected wreck.”

7 Wrath and revenge of a man nursing rejection