Newgrange: A soggy winter solstice, it was not meant to be

Eileen Battersby believes in miracles, but rain sees off any chance of magic in the chamber

While the sun may have failed to illuminate Newgrange's ancient chamber, that did not stop a crowd gathering at the Co. Meath site to celebrate the winter solstice. Video: Alan Betson 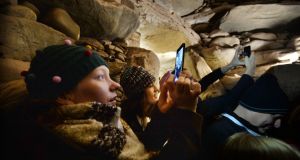 Ailbhe Hickey from Dublin and Aoife Doolan from Cork with other lottery winners in the chamber at Newgrange on the morning of the Winter Solstice, December 21st. Rain and cloud on the horizon at sunrise blocked sunlight from entering the chamber. Photograph: Alan Betson/The Irish Times 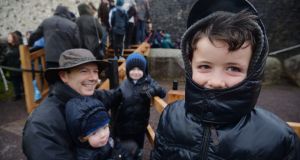 Liam Donegan with sons Bill, Ollie and Frankie from Terenure in the rain outside Newgrange on the morning of the Winter Solstice. Rain and cloud on the horizon at sunrise blocked sunlight from entering the chamber. Photograph: Alan Betson/The Irish Times 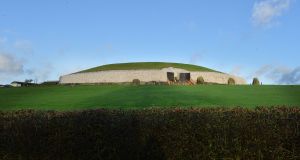 Newgrange on December 21st, 2015, after the weather had cleared. Rain and cloud on the horizon at sunrise blocked sunlight from entering the monument’s chamber. Photograph: Alan Betson/The Irish Times

Even the optimists were conceding defeat.

Trees which had been fiercely battered of late were merely swaying slightly in a strong breeze.

From my vantage point across the valley, directly opposite the ancient late Stone Age monument of Newgrange, in Brú na Bóinne, Co Meath, the scene in the early morning darkness at this mid-point in the five-day annual Winter Solstice cycle was dramatic; lights and moving shapes, with a hint of backstage at a theatre minutes before curtain.

One lurked in hope. But the River Boyne, looking swollen and angry - having already flooded large areas of land on its south bank - was speeding along in flow.

Shortly after 7am the lights appeared to become brighter. It was still dark and the rain, which seemed heavy to me, was referred to as “very heavy” by my companion, but I believe in miracles.

They have happened before on dark mornings, suddenly transformed by gold splitting the heavens. The conditions were less than ideal, but the Solstice sun has often played tricks.

A road which had been under water only a couple of days ago was passable and with more than an hour before sunrise anything was possible. The faint-hearted sighed bitterly, not me.

Grey light slowly took over from the mysterious blackness and if there appeared to be no clouds it was because the sky was completely shrouded in a formidable grey covering.

Then the rain faltered, losing interest.

A fair-sized gathering of seasoned Newgrange watchers and new pilgrims waited in what a weather forecaster would describe as only mild precipitation. For a Monday morning in the days before Christmas, the attendance was better than good.

Sharing in the increasingly kinder dampness was a lone Druid-like individual who, with his predominately green ensemble with its hint of part elf, part tree, seemed very cheerful.

The event was less about glorious sunrises and all about the thrill of having reached mid-winter and Christmas is only a few days away.

An Italian couple with their three adolescent children and a much younger child, a baby in a Star Wars-like carry-cot complete with space age hood, hurried from the scene, “We have been here; we see it now…it is wonderful but we need to eat,” said the father, insisting that they would come again, “in the summer.”

It was indeed touching to observe a delicate, stooped figure in a modest short jacket. He looked frozen and his face was so cold, it was indeed blue.

Minister of State with special responsibility for the Office of Public Works, Simon Harris, stood out largely because of his angelic Tiny Tim pallor and his city clothing. Casting agents in search of a David Copperfield could consider him.

Solstice watchers smiled sympathetically as he posed for a selfie, aware he, the youngest member of the Dáil at 29 last week, was representing the Government.

A very mean person attempted a joke asking him if he enjoyed attending water protests. The connection was obvious - rain and water.

The junior Minister did not laugh, yet remained gracious. Apparently “water” in its wider implications is a difficult one for him, as he has had to deal with the flood damage.

Several mothers present agreed it wrong that the junior Minister had not been given a suitable coat.

Harsh words were uttered about Government funding, not only because Mr Harris, who does have a Victorian quality, clearly needed a sensible coat and because the little hut at the entrance to the World Heritage site could do with some paint.

Prof George Eogan, still at work on the nearby site of Knowth, confirmed his first Winter Solstice at Newgrange had been in 1960. He had begun his excavations in the Boyne Valley at Townley Hall two years later, in 1962.

“But it’s not really that long ago,” he said, serenely gazing towards the dull horizon, “Well, not in human terms.” Archaeologists have a different concept of time.

Admittedly the sense of celebration was more muted than in other years, but people had gathered as had the ancestors more than five thousand years ago. The minutes were racing; the sound of a drum beat could be heard.

There is always that moment of magic when the beam of light seems to turn the world to yellow.

But it was not to happen, at least not on cue, one could imagine the gods being amused at the slight of mortals standing staring at the sky.

Meanwhile, inside the chamber which has withstood everything the elements have thrown at it throughout the centuries, were the lucky winners of lottery tickets.

Standing under the corbelled ceiling and watching down the passageway for the first trickle of light to penetrate the roof box is a reminder of man’s more remarkable achievements.

An orderly line had formed outside the monument but the problem with having to report on an event is that there is a need to mingle. On asking if I could go inside, the reply was “No, there’s a queue.”

A sense of tradition

Never mind, the wonder of Newgrange can endure anything from rain to officialdom. There is the sense of tradition.

A local woman stood, clapping her hands. “I’m cold” she said, and her Christmas wish is that Newgrange is acknowledged as heritage first and tourism second, “not the other way round, as it seems to be”.

Locals and visitors together converge at the ancient site, which remains exactly what it was probably originally intended for – a place of celebration.

In a glorious gesture of irony, with about 40 minutes of a sunrise which occurred behind cloud cover, the sun came forth and a beautiful day followed.

Best of all though, this year the shortest day of the year actually falls on December 22nd - so the feeling of a special occasion has been extended and there could yet be a wonderful light show.

Yungblud: ‘My generation is over being divided’
5