Most overseas visitors ever expected for St Patrick’s Day 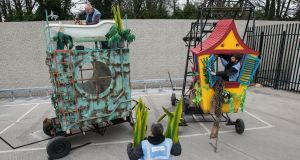 Hundreds of thousands of spectators are expected to throng the streets of cities and towns across the country for this year’s St Patrick’s Day parades.

The largest contingent of overseas visitors to date is set to arrive for the celebrations because of the proximity to the 1916 Rising centenary weekend, according to Fáilte Ireland.

“Because of the closeness of Easter and the commemorations to St Patrick’s Day it makes it a more attractive proposition, particularly for long-haul travellers. We would be expecting to easily exceed 125,000 visitors, up from over 100,000 last year,” a spokesman said.

Almost 60 parades and many more cultural events and festivals will take place throughout the county, but the largest will be in Dublin city where more than 500,000 spectators are anticipated for the main national parade.

The Dublin parade, led by disability rights campaigner Joanne O’Riordan, will start at noon from Parnell Square and finish at St Patrick’s Cathedral at 2.30pm after winding its way along the “civic spine” of the city down O’Connell Street and up Dame Street.

At 19, Ms O’Riordan is the youngest ever grand marshal for the event. She is one of only seven people in the world with tetra-amelia syndrome in which individuals are born without limbs.

Dublin Bus will operate a Sunday timetable with diversions to accommodate the parade route and funfairs. There will be no Nitelink service.

Dart and commuter trains will also operate to Sunday service but with extra trains before and after the parade. Tara Street Station will be closed until 4pm. Intercity services will will operate to a revised schedule with details at irishrail.ie