Meanwhile, in other news

An Irishman’s Diary: On the lesser-known journalists who died with Francis Sheehy-Skeffington 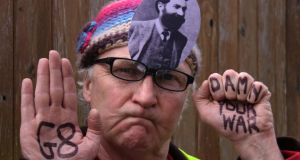 ‘Tomorrow’s day-long school at Liberty Hall will revolve around the theme of human rights, Francis and Hanna Sheehy-Skeffington’s life-long obsession. It will be rounded off with drama: extracts from a work-in-progress by Donal O’Kelly (above)’.

The second annual Sheehy Skeffington School takes place this weekend, and an e-mail from the organisers set me reading again about the shameful events at Portobello Barracks in Easter 1916.

In some ways, the story is well known. It begins on Tuesday, the day after rebels seize the GPO. The pacifist Francis Sheehy-Skeffington, a newspaper man sympathetic to the aims of the Rising, but not the means, is out on the streets engaged in yet another of his principled causes – the prevention of looting.

He is nevertheless arrested and held without charge at Portobello. There he is handed over to the psychopathic Capt Bowen-Colthurst, who first uses him as a human shield during a murderous rampage in the locality. Then, on Wednesday, Sheehy-Skeffington is shot by firing squad, alongside two other journalists, Patrick McIntyre and Thomas Dickson, picked up the night before.

A cover-up ensues, but it is unsuccessful. Bowen-Colthurst is eventually court-martialled, found insane, and detained for a time in Broadmoor Criminal Lunatic Asylum, before being “cured”. Quietly released, he emigrates to Canada on a pension and dies there, peacefully, in 1965.

All this is well known. But re-reading the sad tale, I was struck – not for the first time – by the obscurity of the men shot alongside Sheehy-Skeffington. Described usually as the editors of The Searchlight and The Eye-Opener , respectively, they rarely merit further mention. Their newspapers seem to have died with them.

Some contemporary commentators (including Hanna Sheehy-Skeffington) describe the organs as “loyalist”, which only adds to the apparent lunacy of Bowen-Colthurst’s actions. There are also occasional but vague hints that neither man was a great loss. This lends the story a Calvaristic element: the brilliantly-lit martyr surrounded by two obscure sinners.

At least one report of the period connects McIntyre with another journal called Spark , but this was probably his captors’ misinformed suspicion. Spark was a thoroughly nationalist paper, as short-lived as its name suggests, but also perhaps as successful. It began in late 1915 and disappeared with the Rising, its job done.

Of The Searchlight , I can find nothing. But McIntyre had been earlier involved in another paper called The Toiler , which established him as an enemy of Easter Week’s socialist faction, at least. Sympathetic to William Martin Murphy, The Toiler appeared during the 1913 Lockout, attacking James Larkin, who, among other things, it suggested was the illegitimate offspring of James Carey, the informer in the Phoenix Park murders.

Thomas Dickson may have been even less popular with the rebels, although not necessarily for his politics. In statements afterwards, he is mentioned as having had unspecified disabilities – the terms “crippled” and “deformed” are used – but also of being “unsavoury”. As for his political beliefs, if any, these are hard to discern from The Eye-Opener .

Another fleeting publication, its entire run now fits easily onto a single microfilm reel in the National Library, where I spent an hour reading it recently, in appalled fascination. Much of the material comprises anonymous letters like the one warning a “certain young person of Rathgar Road” that if she doesn’t stop stalking a “married man on Cambridge Road” she will be exposed by name in a future issue. “What is her father about?” the writer asks: “She richly deserves a spanking”.

Another letter warns unwitting husbands that wives attending an unnamed church in Rathmines are receiving more than religious instruction from the reverend. It wonders why they have not already thrashed the “carcase” of the “sky pilot”.

For the best such “eye-openers”, the editor offered a weekly prize of five shillings. Insofar as the paper had a political target, it was a city councillor, Joe Isaacs. In a series of editorials, he is described variously as a “Scotch Jew” who sells “cheap jack ready-made clothes” from “sweated labour”, while also hosting a “gambling den” in Westmoreland Street where his employees include “a German”.

There is a suggestion that it was the councillor’s recent support for an “early-closing order” that incurred the paper’s enmity. But there are so many axes being ground in The Eye-Opener , it’s hard to be sure.

Dickson appears to have had a busy week immediately before the Rising. Part of it, ironically, involved the GPO. In his last issue, he publishes details of a receipt from the post office for a £100 cheque wrongly issued to him and promptly returned. Such honesty may surprise his detractors, he suggests, hinting at his recent notoriety.

Sure enough, The Irish Times of April 20th, 1916 – Easter Thursday – reports his prosecution for libel by Cllr Isaacs and notes that, pending trial, Dickson has been allowed “stand out on bail”. Poor Dickson. Perhaps history has decided wisely in its discretion about him. Having drawn back the sheet, I hereby replace it.

The contrasting fame of Francis and Hanna Sheehy-Skeffington continues to grow, meanwhile. Tomorrow’s day-long school at Liberty Hall will revolve around the theme of human rights, their life-long obsession. It will be rounded off with drama: extracts from a work-in-progress by Donal O’Kelly. Full details at sheehyskeffingtonschool.org