An Irishman’s Diary about deportation and denial 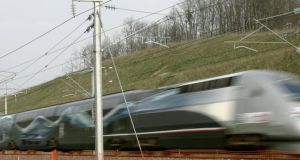 The trains in France are such a joy. Photograph: Reuters

Reading and hearing all the commemorations of World War I and its start in Sarajevo brought to mind a visit we paid to the place where it all ended: Compiègne.

On a visit to Paris we decided on a whim to catch a train to this small town in Picardy 70 kilometres north of the French capital. It was here, in a forest clearing, that Marshal Ferdinand Foch took the German surrender in a railway carriage in November 1918. And it was in the same railway carriage in that very clearing that Hitler accepted the French surrender in June 1940.

Compiègne boasts an historic royal chateau, as well as its site commemorating the Armistice. What we did not know was that the town also played another role during the second World War, one that gets scant mention, if any, in the tourist guides.

Our day trip offered another excuse for a jaunt on a train. The trains in France are such a joy: we island-dwellers love the way you can step aboard and all of Europe is open to you. A smooth, enjoyable journey brought us to Compiègne.

It was a dull October afternoon, but the town seemed abuzz with activity. Policemen and policewomen hovered around the streets. Most were toting guns. Had revolution broken out? Well, no, it was simply a march by workers at a local factory, protesting that its multinational owner was moving their jobs to another country. Their union colleagues from nearby Beauvais joined them, disgorging from their train in a flurry of flags and placards. A band struck up and off they marched. The French do this sort of thing with such panache, we thought.

The chateau was closed, so we set out to find the site of the Armistice. The railway carriage on the site today is not the original: Hitler had that one towed back to Berlin after getting his revenge, and it was reportedly destroyed in Allied bombing. Hitler also had had the forest site levelled, but it has since been restored, with the space dominated by the huge Alsace Lorraine monument and a statue of Marshal Foch. There is also a small museum.

It was beginning to rain, so we headed back to the town, taking a different route. Walking briskly along a busy road beside an oak wood, we saw a sign pointing into the trees. It made us stop dead and look again. The words on the sign read “Last Train to Buchenwald”. We didn’t have the time to go searching in a wet French forest to find out more. Nor did we want to.

The day had grown darker. By the time we reached the town, the march had passed off peacefully and the police were just directing traffic. We were in plenty of time for our train.

In the station at Compiègne long platforms flank the tracks that snake away over the flat countryside. Ambling about to pass the time, we reached the end of the platform and saw some kind of small war memorial beside old goods wagons on a siding.

Deciphering the faded French, we discovered Compiègne’s other place in history. This plaque was in memory of the thousands of Jews and others who had been loaded into railway wagons on this very spot and taken away to die in Nazi death camps. The town had been a staging post for this evil transport.

Later we would find out the significance of that other sign we’d seen along the road: a gravestone in those woods marks the spot from where the last train to Buchenwald departed on August 17th, 1944, taking 1,250 men to the death camp.

As we awaited our train back to Paris we were approached by a mild, bespectacled man who addressed us in halting English. “You read this?”, he said, indicating the memorial. We nodded. “This thing,” he said, shaking his head. “Yes,” we said, “a terrible thing.” He then said emphatically, “No! This thing did not happen.”

We began to edge away. But he followed us. “I have 69 years, and I know this not happen,” he assured us. One of us said something sotto voce about his appearance, and he became indignant. “I am not Arab. I am Tunisian, and I know this is lies,” he said.

Our train arrived right on time and we jumped into a carriage far from his. We glided back to Paris in comfort. French trains are such a joy.

The Billion Dollar Art Hunt: Searching for a Vermeer with Martin ‘The Viper’ Foley
9 Polemic without plausibility
10