How the Battle of Clontarf unfolded

Use our interactive map below the article to better understand how the Battle of Clontarf unfolded. 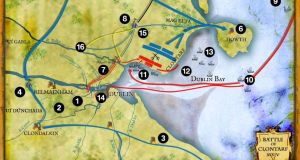 Brian Boru marches his Dá l Cais army on Dublin in autumn 1013 and again in spring 1014 (1) to put down a rebellion led by King Sitric Silkenbeard. Sitric has recruited men from Leinster and farther afield, most significantly Earl Sigurd of Orkney and a Viking called Bró dar. Settlements at Kilmainham and Clondalkin, to the west and southwest , are sacked (2) .

In spring 1014 Brian’s forces camp outside Dublin, possibly near Kilmainham (4) , and go to sack Fine Gall (5) and Howth (6) . Dublin men leave the city to relieve Howth. L ed by Sitric’s brother Dubgall they cross the Tolka towards Mag Elta (7) , now Baldoyle, along the coast near Howth . Brian sets up camp overlooking Clontarf (8) as his forces continue towards Clontarf Weir, which is likely part of present-day Fairview Park.

The Viking fleet, commanded by Bró dar, enters Dublin Bay (9) . The Dublin fleets assemble off Howth (10) and sail inland on a high tide at dawn on April 23rd (11) . They land near Clontarf Weir and join the Dublin Norsemen, under Sitric, and the Leinster men, under Sitric’s uncle Má elmó rda. Brian does not take part , but his son Murchad commands the Dá l Cais, with reinforcements from Munster and Connaught.

The battle, probably centred on the area now between Castle Avenue and Seaview Avenue in Clontarf, lasts the day, during which Norse and Leinster forces are pushed back to sea and defeated. Surviving Norsemen head south and west for Dublin, crossing the Tolka via Dubgall’s Bridge (thought to be at Ballybough, west of the battleground). They are ambushed and massacred.

Other survivors try to escape down to the beach (12) , but they are trapped by the tide, westwards along what is now Fairview Park , and eastwards towards Vernon Avenue. They are drowned or killed, and the tide disperses the Viking fleet into the bay (13) . After the massacre at Dubgall’s Bridge, just 20 survivors make it back to the safety of Dublin city (14) .

Má elmó rda of Leinster and Sigurd of Orkney are killed in battle, as are Brian’s son Murchad and nephew Conaing. Bró dar escapes and is thought to have killed Brian (15) . Bró dar is in turn captured and disembowelled (16) . Brian’s body is brought for burial in Armagh . 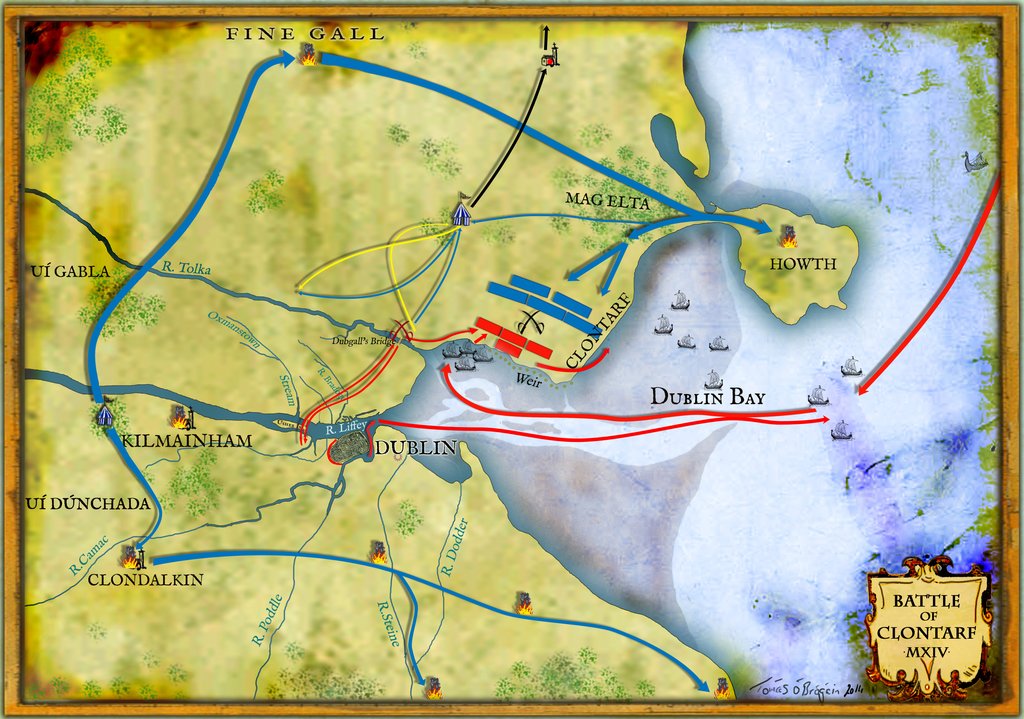