How long should personal letters and State papers be kept under wraps? 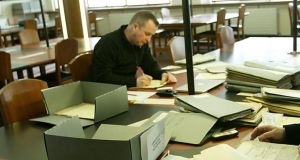 ‘National archives are coming under increasing pressure to produce documents sooner than has been established practice.’ Photograph: Brenda Fitzsimons

In 1942 Agnes O’Kelly, a Catholic woman from Kerry, emigrated to the north of England where she practised as a doctor. As an Irish emigrant, she never acknowledged the number of siblings she had. Her son, the English author and poet Blake Morrison, discovered only after her death that she was the 19th born of 20 children.

In reflecting on her reticence about the true extent of her family, Morrison wrote: “Perhaps the awkwardness was that such numbers [of siblings] advertised her Irishness . . . back then, In England at least, Irishness carried a taint, which emigrants did well to lose . . . she’d reinvented herself – and done it so thoroughly that she failed to set the record straight with her own children.”

Morrison exacted a revenge of sorts. His discovery of his parents’ wartime correspondence led to his memoir in 2002, Things my Mother Never Told Me. Agnes’s correspondence revealed the frankness with which she and her future husband, a Protestant, discussed their emotional feelings, religious mores and differences, and family planning.

Intimate Morrison had, in his own words, “stumbled into the archive of my parents’ courtship”. He also suggested that to read this intimate correspondence not intended for his or anyone else’s eyes and then publish it, was “transgressive”, and “a s**t’s trick.”

Other writers and biographers – perhaps inevitably given their calling – have done likewise. When does such intimate material belong to history and all of us? It is a question that has surfaced again with the publication of extracts and the proposed sale of letters from Jackie Kennedy to Fr Joseph Leonard, 20 years after her death in 1994.

Debate about the appropriateness of these Kennedy letters coming into the public domain suggests that there are no easy answers and no one-size-fits-all when it comes to the release, sale and use of sensitive archival material.

Implications But alongside the Kennedy letters issue, there are other developments in relation to archives, state and private, that perhaps should invite a step back to look at the implications of material coming into the public domain too soon.

National archives, for example, are coming under increasing pressure to produce documents sooner than has been established practice. In 2010 the UK’s ministry for justice announced that British state papers would be released after 20 years instead of 30.

There had been demands for a 15-year rule, but the ministry maintained that the compromise of 20 years would allow a balance to be struck between accountability and premature release of material that might impact on current government. The transition is currently being managed, with double the amount of 30-year-old material being released from this year onwards in order to clear the backlog.

Dilemma Though the Irish Government is considering a phased introduction of a 20-year rule covering the archives of some government departments, no decision has yet been made on this. The State may soon face a dilemma in relation to Irish releases about the same subjects lagging 10 years behind British releases. How, for example, could historians do justice to the history of Anglo-Irish relations in the 1990s if only one side of the relevant papers were available?

But is a 20-year rule wise? A review panel, whose deliberations led to the British change, suggested the move could contribute to greater trust between politicians and people. This might appear laudable, but it is not without complications.

Surely individuals involved in government will be more reluctant about the views they express or what they document if the material will be released when they are very likely to be alive or, indeed, likely to be still in public life or even in government. And will enough time have passed to place the issues being deliberated on in their proper historical context?

Boston College tapes Such questions also bring to mind the now infamous Boston College tapes. The label “history project” being attached to the tapes is arguably a dubious one. Ed Moloney’s recent defence of the project in this newspaper suggests that the project was about facilitating “a different account of events from the one peddled by the Sinn Féin leadership”, and was a “liberating experience” for those critical of the current leadership of Sinn Féin and its version of the 1981 hunger strikes. As Moloney sees it, “it is about who controls the narrative of the IRA’s part in over 30 years of violence in the North”.

This is deeply problematic. A “history project” driven by a crusade to expose the alleged lies of certain individuals inevitably invites suspicion that it is more about contemporary politics and journalistic priorities than historical posterity.

Historians at Boston College, in their own words “had not been informed of the project, nor had they or the department been consulted on the merits of the effort or the appropriate procedures to be followed in carrying out such a fraught and potentially controversial venture”.

Testimony that is genuinely meant for posterity should be locked away for a very long time, and if such safeguards cannot be guaranteed, it should not be presented as a “history project”.

Diarmaid Ferriter is professor of modern Irish history at UCD

‘The Crying Game’: ‘They wanted me to cast a woman that was pretending to be a man’
10