Side streets, lanes recommended for designation despite State fight against protection 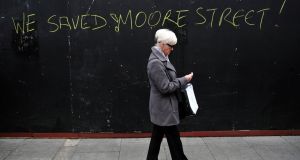 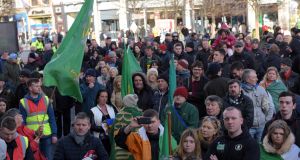 Save Moore Street from Demolition campaigners march from Liberty Hall to the GPO via the street in January 2016. Photograph: Bryan Meade 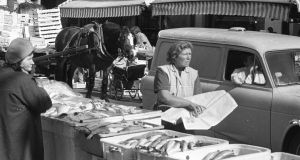 Plans to develop a historic cultural quarter on Dublin’s Moore Street and surrounding lanes have been endorsed by the Minister for Arts and Heritage – even though the State is appealing a court order protecting Moore Street as a 1916 “battlefield site”.

In March 2016, the High Court’s Mr Justice Max Barrett ordered the protection of nearly all of the buildings on the east side of Moore Street, as well as the laneways leading to it.

The judge declared the buildings a 1916 Rising battlefield site that collectively constitute a national monument.

Colm Moore, a nominee of the 1916 Relatives Association, took the case against the Minister, Heather Humphreys, to extend national monument status to all Moore Street buildings linked to the Rising. Last June the Government decided to appeal the ruling following advice from the Attorney General.

However, in that same month Ms Humphreys established a Moore Street Consultative Group, which included political representatives, relatives and market traders, to make recommendations for the future of the street.

Their report, which was submitted to the Minister on Wednesday recommends the development of the “battlefield area” as part of a historic cultural quarter.

This would include the retention of historical structures and the “line and form of the block” from 10-25 Moore Street; the pedestrianisation of the street and surrounding lanes; the upgrading of the market trade facilities and a review of the trading byelaws; and the restoration of historic buildings, including the National Monuments buildings at number 14-17 Moore Street.

Crucially, the report recommends not only the protection of the street itself but its back lanes, including O’Rahilly Parade, Moore Lane and Henry Place. These were due to be levelled as part of the Dublin Central Shopping Centre development.

The developers behind the €1.25 billion shopping complex have until 2022 to build on the site. The report says the developers have “advised that they are prepared to consider alternative options”.

A spokesman for the developers said: “ We continue to consider a range of options for the regeneration of this uniquely positioned site.”

Ms Humphreys said the report “can help find a way to breathe new life into the Moore Street area, while at the same time retaining its sense of history and enhancing its traditional street market”.

She said she would recommend to Government the establishment of a new advisory group to advance the recommendations of the report.

A department spokeswoman said the High Court judgment had given rise to concerns for the “Minister’s own department with regard to the operation of the National Monuments Acts, and for other departments and official bodies in relation to public and social infrastructure provision.

“The judgments have accordingly been appealed and the appeals are being progressed in the courts”.