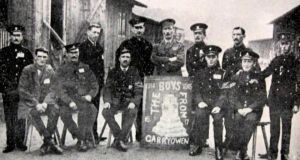 A group of Irish men from Garryowen, Co Limerick, members of the British army, at the Giessen POW camp during the first World War.

Thousands of Irishmen were taken prisoner by the German army in the first World War and housed in prisoner-of-war camps in Germany.

It is estimated that at least 10,000 Irishmen spent the war in German POW camps. For these men, and for their families back home, the names of places such as Limburg, Sennelager and Giessen were as familiar as the counties they came from.

A significant number of these Irish prisoners were captured in the early days of the war. At Le Grand Fayt on August 26th, 1914, 280 Connaught Rangers surrendered.

In late October 1914, 303 men of the Royal Irish Regiment were taken prisoner at Le Pilly.

At first, conditions were abominable. The German army had made no provision for POWs. Men were forced to march for hundreds of miles to camps in Germany. When they got there, they were forced to sleep out in the open air in all weather conditions and subsist on starvation rations.

“Starvation, misery, and cruel treatment constituted our lot during our time in Sennelager,” one prisoner wrote.

On the 22nd December, 1914, they were transferred to the Limburg camp in northwest Germany.

Here, the German army gathered some 2,400 Irish prisoners together, mostly from the ranks of the Royal Munster Fusiliers, the Royal Dublin Fusiliers, the Connaught Rangers and the Leinster Regiment, all of whom suffered heavily during the early stages of the war.

There then occurred one of the most extraordinary events of the war. Roger Casement came to the camp to recruit an Irish brigade from among the captured prisoners to fight on the side of Germany against Britain.

Casement promised them that they would be the vanguard of an army that would liberate Ireland from British control, but only 57 men signed up. Those who stayed behind were treated badly.

Eventually, many of the men were moved to Giessen camp nearby. As German POW camps went, it was not the worst. “The place is well drained, the water is excellent, the sanitary conditions are good too, the sleeping accommodations are ample,” wrote Private Simmons, a Canadian POW in Giessen.

We are looking to tell the story of five Irishmen, listed below, who were in Giessen POW camp in 1917. Can you help us? Are you related to these men or know something about them? Please email us at century@irishtimes.com.