Broadcaster’s father, who was a Guinness employee, and seven uncles fought in the war 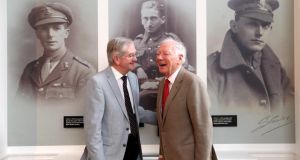 Maurice Byrne and Gay Byrne, both of whose fathers served in the first World War, at the Guinness first World War exhibition at the Ireland Funds Gallery in the Little Museum of Dublin. Gay Byrne opened the exhibition, which is in place for six weeks. Photograph: Jason Clarke

An exhibition relating to Guinness and the first World War was “entirely unique because it is the story of a war seen through the eyes of individual men and their families”, broadcaster Gay Byrne has said.

Byrne has opened the exhibition at the Little Museum of Dublin. His father Edward joined the 19th (Hussars) as a cavalryman and survived the war. He was one of what was known as the “Old Contemptibles”, who were professional soldiers before the first World War broke out. Seven of his brothers served and one died from gas poisoning a year after the war ended.

The Guinness brewery was a big supporter of the war effort. It ensured that the families of those who joined up from the brewery were given an allowance during the war and guaranteed their jobs afterwards.

It was also one of the few employers to encourage employ ex-British servicemen when the war ended and sentiments changed in Ireland.

Byrne made a documentary about his father last year entitled My Father’s War.

At the launch, he said reaction to the documentary had been “universally favourable, funnily enough” and many people had approached him saying they knew nothing of Ireland’s involvement in the war.

“My answer is, ‘how could you because you were never told’. In all the years I was in the Christian Brothers in Synge Street, we were told about Pearse and Connolly over and over again, but the Great War was never, ever mentioned.”

Byrne said the Guinness exhibition along with the exhibitions on the war in Collins Barracks, the Hugh Lane Gallery and the National Library of Ireland, were now raising awareness of Ireland’s contribution to the war effort. Byrne described the exhibition has being of “exceptional significance and is entirely unique because it is the story of a war seen through the eyes of individual men and their families and also through a patriarchal company that had a major influence on employee’s lives, endeavouring to provide for those who went to war and to make a meaningful contribution to the war effort”.

Guinness made special efforts for employees who joined the armed forces paying half wages to the soldiers’ families at home and their jobs were guaranteed when they returned. Special ‘war bonuses’ were also paid by the company.

A War Gifts Committee was established in the brewery to dispatch parcels to men in active service, despatching Vaseline and soap, cake and biscuits, tobacco and matches as far afield as Mesopotamia, Greece and France.