From the archive: Handled with care and great dedication 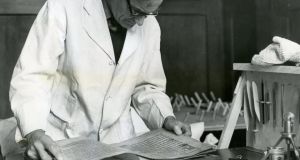 The work of re-binding the Book of Kells is almost ended. Mr Roger Powell, the private book-binder of Peterfield, Hampshire, was entrusted with this task by the Board of Trinity College, Dublin. Photograph: Dermot Barry / THE IRISH TIMES

If you had to guess what this man is doing, you might opt for something slightly scientific, or even medical: such is the formal atmosphere created by the white coat, the row of specialist tools, the miniature tripod and the air of concentration with which he is bent over his work.

Actually, you wouldn’t be far wrong. What he’s studying is the Book of Kells and he is the English bookbinder who came to Dublin in 1953 to give this priceless object some technical TLC.

By the time our picture was taken the rebinding was almost complete, Roger Powell and his assistant, Pamela Fowler, having set up their workshop in the manuscripts room in the library of Trinity College the previous August.

The article which accompanied our photo describes him as “the private book-binder, of Peterfield, Hampshire”.

The author of that piece may not have realised that Powell was a bit of a legend in the bookbinding trade: after his death in 1990, a colleague called him “one of the most important and influential bookbinders of the last 100 years and, arguably, of any period”.

Bookbinding is something of an enigma to the wider world, with a language and culture all of its own. (While researching this article I have, for example, been trying to figure out what is meant by the term “quire tackets”. The explanations, alas, are even more arcane than the phrase itself).

What is crystal clear from Powell’s body language in our photo, in any case, is that he is totally dedicated to his chosen profession.

The shot hums with quiet intensity; lost in his contemplation of the pages before him, Powell seems oblivious to the presence of the camera.

It’s easy to understand how his fellow binders would value his creativity, sensitivity and “insatiable curiosity about how books work” – qualities which shine forth from this image, without the need for any words at all.