Fergal Keane: The Irish buried in a foreign field

Battle of the Somme centenary

Over 3,500 Irish men died on the first day of the Battle of the Somme, with many more wounded. Many of these men went to war in the hope of securing Home Rule, others with a desire to build stronger relations to the empire. Video: Enda O'Dowd 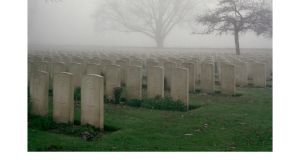 Each year in the planting season, the fields offer relics. Earth is turned and the past is dislodged. A boot half eaten by time, a bayonet rusted and blunt, the cap badge of a soldier who marched to his doom on the first day of July 1916.

Over three months of fighting at the Somme, Irishmen, from North and South, were killed and wounded here. They were annihilated by the same bullets and explosions, and were buried in the same earth of northern France.

In remembrance, however, they would be set apart. The men of the 36th (Ulster) Division were posthumously exalted, marshalled into the service of loyalism’s myth of origin: they were the warriors who shouted “No surrender!” as they marched stoically to meet their deaths.

“The Derry’s, on our left, were so eager they started a few minutes before the ordered time, and the Tyrones were not going to be left behind, and they got going without delay – no fuss, no shouting, no running; everything orderly, solid, and thorough, just like the men themselves. Here and there a boy would wave his hand to me as I shouted ‘good luck’ to them through my megaphone, and all had a happy face.”

Soon enough the happy faces were distorted by terror. On that first day of the Somme, the Ulster division suffered 5,100 casualties. Col JA Mulholland of the 14th Battalion Royal Irish Rifles said that “nothing finer in the way of an advance has ever been seen, but alas, no sooner were they clear of our own wire when the slow tat tat of the Hun machine guns from Thiepval village and Beaumont-Hamel caught the advance.”

They advanced and were driven back and were then caught between the artillery of both sides. Pte Leslie Bell was the only survivor of his platoon. A German shell exploded in the air, showering shrapnel and badly wounding him in the legs.

The reality of war always runs counter to the grand heroic narrative. The truth is in the detail of mangled bodies and mud.

Capt Montgomery of the 9th battalion, Royal Irish Rifles, described the trauma of the first day: “Not a few of the men cried and I cried. A hell of a hysterical exhibition it was. It is a very small company now. I took 115 other ranks and four officers (including myself) into action. I am the only officer and only 34 other ranks are with me now out of the 115.”

Yet this battle in which so little was gained, and so much lost, would become a pillar of Protestant identity. The working class men who died, and those who came home, did not see themselves as “lions led by donkeys”. Rather, the Somme would serve as a reminder to Britain of the debt of loyalty owed to Ulster, and a warning to Irish Catholics of the lengths to which loyalists would go to protect their identity.

The revisionist history of the Great War would never find favour in Ulster. The simpler mythology of glorious sacrifice has only been challenged in recent decades by the groundbreaking work of writers like Philip Orr whose book The Road to the Somme gave voice to the harrowing testimony of veterans.

However, in the South there was neither mythologising or factual narrative, simply forgetting. Here, the men who fought in British uniform were ignored and marginalised. How could they compete with the nation’s official heroes, who had gone to their deaths before British firing squads at Easter 1916?

The Irish Party leader, John Redmond, had urged his followers to war because he believed that nationalist sacrifice might persuade the Ulster Protestants to believe in a shared future. At Woodenbridge in September 1914, Redmond declared: “This war is undertaken in the highest principles of religion, morality and right.”

By 1916, with the true nature of the war clear, one of Redmond’s MPs, the poet and lawyer Tom Kettle, remarked to a fellow soldier at the Somme that while the executed rebels would be remembered as heroes, he would be seen as a “bloody British officer”.

When the 16th Irish Division attacked Guillemont and Ginchy on the Somme in September, nearly half of the 2,400 involved were killed, Kettle among them.

Father of a friend

Harris marched off to war when Dublin was still a great city of the empire. On his return there was a new national army and a new set of heroes. So he went back to war, joining Churchill’s expedition in support of the White Russians against the Bolsheviks. Like many men who endured the trenches, Harris struggled to settle down. When the second World War began, he volunteered again.

His daughter Breda, our good friend, was fiercely proud of him and would demolish any detractors of the uniform he wore. Long before it became fashionable, Breda was visiting the graves of the Somme. “I had to show that these men were not forgotten,” she says.

Last week at the Islandbridge War Memorial, I met Liam Dodd, whose great granduncle, also Liam, was killed on the first day of the Somme with the Dublin Fusiliers. Around us families wandered through the immaculate gardens, restored now after decades of shameful neglect.

Dodd grew up knowing little of his ancestor’s story. “It wasn’t talked about in Ireland in those days.”

The economic reasons that sent many Irishmen to the ranks of the British army should not be forgotten. It was not simply a question of nationalists following Redmond’s call to arms, but part of a much longer tradition of military service.

“They were working-class men who needed to feed their families,” Dodd tells me. “That was a sacrifice, heading off to war to make sure your family had a roof over their heads and were fed.”

He is heartened that attitudes have changed. Irish Presidents and the British royal family have paid joint tribute to the dead of wars and revolution. Irish identity is secure enough to at last embrace the forgotten dead of the Western Front.

In the Flanders village of Wijtschate, Philip Mingels, a guide who specialises in the history of the Irish and Ulster Divisions, hosts visitors from North and South. “Both sides still come with their myths about each other, but it is better than before,” he says. “I try to make sure that they both know what the other side did here.”

I followed him to a cornfield just outside the town. There is a small cemetery with the familiar rows of white stones. Standing apart from these is a larger stone cross. At the base, among the flowering shrubs somebody has placed a small Tricolour.

At Messines, Irish nationalists and Ulster Protestants fought together for the first time. As Redmond lay mortally wounded in a shell hole, he was attended to by stretcher bearer John Meek. Twice Meek refused Redmond’s orders to seek safety. Although wounded himself, he brought Redmond out of the line of fire. Meek was a proud loyalist.

The previous March, Willie Redmond spoke in Westminster, during his leave. There he asked his fellow MPs: “Why must it be that, when British soldiers and Irish soldiers are dying side by side, this eternal quarrel should go on?”

And it went on and on. Willie Redmond was forgotten by his country. In the by- election that followed his death, the seat was won by Eamon de Valera.

Only now has Ireland begun to acknowledge the lost soldiers of the Somme. Fergal Keane is a BBC correspondent