After a chaotic week, British commander Maxwell proceeds, against advice, with executions. Confusion over who is to die causes upset, and some sentences are meted out arbitrarily 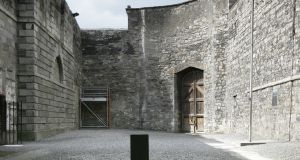 A cross which marks the place where James Connolly was executed, sitting in a chair, in the stonebreakers yard in Kilmainham Gaol yesterday. The other thirteen leaders of the rising were shot against the opposite wall. Photograph: Frank Miller

On the night of May 7th, hours before his execution, Michael Mallin, who had commanded the Irish Citizen Army at St Stephen’s Green, wrote to his wife of how he had passed their house, a few hundred metres from Kilmainham Gaol, as he was being led from Richmond Barracks to his final destination.

He hoped to catch sight of his “darling wife, pulse of my heart”, or their four young children. “The only one of my household that I could cast my longing eyes on was poor Prinnie the dog; she looked so faithful there at the door . . . I am so cold; this has been a such a cruel week.”

In the context of a vicious war it was probably inevitable that the British authorities would mete out the ultimate punishment to at least some of those who had attacked their forces and openly declared an alliance with Germany, the enemy.

In the context of Irish history it was perhaps equally inevitable that those reprisals would alienate much of Irish opinion. Most Irish and even many British politicians understood this, but with martial law in force, and Sir John Maxwell installed as military governor, political subtleties were never likely to dominate the official response.

In the immediate aftermath of the Rising the authorities arrested 3,430 men and 79 women thought to be “Sinn Féiners”. The accuracy of the intelligence on which the arrests were based can be judged from the facts that 1,424 were released within a fortnight and that all but 579 were subsequently released as posing no danger to the state.

Even some of those who were deported, along with the veterans of the Rising, to English prisons and the Frongoch internment camp in Wales had no previous involvement in violent nationalism. The main effect of the arrests, therefore, was to alienate nationalist opinion. At the same time details began to emerge of British atrocities, including the murders of Francis Sheehy Skeffington and other innocent civilians.

The revelations undermined the assumption of moral superiority that, for the authorities, justified the executions of the leaders of the Rising.

The first military courts martial sat on May 2nd; they immediately sentenced three men – Patrick Pearse, Tom Clarke and Thomas MacDonagh – to death. The three were taken that evening to the disused Kilmainham Gaol and shot at dawn on May 3rd in the Stonebreaker’s Yard.

Clarke, who had spent a quarter of his 58 years in prison for Irish Republican Brotherhood activities, told his wife during the night that he was relieved he was going to be executed, because his greatest dread was that he would be sent back to prison.

Immediately after the executions of Pearse, Clarke and MacDonagh the Irish Parliamentary Party leader, John Redmond, warned the prime minister, Herbert Asquith, that “if any more executions take place in Ireland the position will become impossible for any constitutional party or leader”.

Asquith himself warned Sir John Maxwell that “anything like a large number of executions would . . . sow the seeds of lasting trouble in Ireland”.

But Maxwell kept the executions going, even after May 8th, when the prominent Irish Parliamentary Party politician John Dillon told him that “it really would be difficult to exaggerate the amount of mischief the executions are doing”.

The courts martial were held in secret, at least partly because, after a chaotic week, it was extremely difficult for the authorities to present detailed evidence against specific individuals.

According to one of those tried, William Cosgrave, “my recollection is that we were assembled into groups and ushered into the court, consisting of three senior officers. The president of the court, or the crown prosecutor, Lieut Wylie, informed us we were being tried by field-general court martial.

“No person was allowed to appear and speak on behalf of the prisoner, but each prisoner would be permitted to bring a friend with him, who he could consult and who would be free to advise the prisoner but not address the court.”

The charges were laid according to a formula: “You are charged with having been one of a party at [whatever location] from which shots were fired, occasioning casualties amongst His Majesty’s troops, and you are further charged with conspiracy with His Majesty’s enemies.”

The evidence against many of the rebels was deeply confused, however. Those who fought at the South Dublin Union and Marrowbone Lane were charged with having been in the Jacob’s factory.

According to Cosgrave, “Capt Rotheram, one of the best-known and most-popular sportsmen of the County Westmeath, the best polo player at number one in Ireland, took the surrender of the Volunteers at South Dublin Union and Marrowbone Lane, and marched with the prisoners to Bride Road.

“He was called upon the following day to give evidence of the surrender in both places. His reply was that he had not seen these men yesterday, that he did not know them, not having seen them before, that he would not know them again; that he would not feel justified in giving testimony. It is but fair to say that his sight had become impaired, which was the reason assigned for his relinquishing polo.”

Many of the prisoners had little idea what to expect. Some of the leaders, including Patrick Pearse and Thomas MacDonagh, knew even before their trials that they would be killed. Pearse wrote to his mother on May 1st that he hoped his followers would be spared but that “we do not expect that they will spare the lives of the leaders”.

But many of the rebels seem to have expected relatively lenient treatment. William Cosgrave reported “some astonishment” among the prisoners at the sentencing of two men, Dick Davis and Sean McGarry, to eight years’ penal servitude.

Even some of the most prominent leaders seem not to have expected a death sentence. According to Cosgrave, Éamonn Ceannt “had determined to make a fight for his life”. John MacBride “evidently thought he was facing a term of imprisonment, as he expressed to me his anxiety that his position as an official of the Dublin Corporation would be there for him on his release”.

These illusions were shared by some of the families of the rebel leaders and were prolonged by the often haphazard handling of the executions.

The secrecy of the trials added to the confusion, and the decision about who would or would not be executed was at times arbitrary.

Maxwell explained to Asquith that those to be executed would be signatories of the Proclamation, commanding officers or known murderers. But Willie Pearse, who was not among the leaders, seems to have been killed for no reason other than his relationship to his brother, Patrick. Eoin MacNeill was arrested and tried even though he had tried to stop the Rising.

And of the 90 death sentences handed down by the courts martial Maxwell commuted all but 15. Among them was that of Constance Markievicz, who, according to the young barrister William Wylie, who was co-opted as deputy-advocate general, had pleaded at her trial: “I am only a woman. You cannot shoot a woman. You must not shoot a woman.”

Some prisoners heard their comrades being shot and wondered if they themselves would be next. At daybreak on Friday, May 5th, William Cosgrave, whose cell in Kilmainham was next to that of Maj John MacBride, “heard a slight movement and whisperings” in the major’s cell. “After a few minutes there was a tap on his cell door. I heard the word ‘sergeant’, a few more whispers, a move towards the door of the cell, then steps down the corridor, down the central stairs.

“Through a chink in the door I could barely discern the receding figures; silence for a time; then the sharp crack of rifle fire; then silence again. I thought my turn would come next, and waited for a rap on the door, but the firing squad had no further duty that morning.”

That afternoon Cosgrave learned from a priest that his death sentence had been commuted.

Ruth Ellis: The model who smiled at her executioner
Real news has value SUBSCRIBE