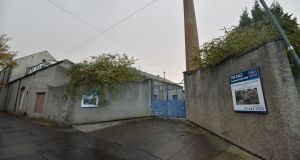 Plans to demolish the former Magdalene laundry in Donnybrook, Dublin 4, have been scrapped amid concerns about the cultural, historical and conservation significance of the site.

A report from the Dublin city archaeologist Dr Ruth Johnson last September said there was “potential for burials being uncovered” at the site, given its history as a Magdalene laundry.

The Religious Sisters of Charity who ran the laundry said last month they did not have any reason to believe former residents may be buried in unmarked graves on the site.

However, the developer, investment firm Montlake, has this week withdrawn its application to demolish the laundry and replace it with a scheme of 25 apartments.

The laundry on The Crescent in Donnybrook was run by the nuns for more than 150 years, with 100-120 women working there at any one time through most of its years of operation since 1837.

The nuns eventually sold the laundry in 1992 to a private company, which ran it on a commercial basis until 2006. Two women who continued to live in the institution were subsequently employed by the laundry company. A convent building adjoining the site, St Mary’s, is still used by the Sisters of Charity.

The plans, she said, did not show sufficient regard to the significance of the site, and were a “disappointing response to the architectural and historical richness of the site”.

The full demolition of the site, apart from the chimney, “not only removes character, but also potential diversity of use and unique sense of place”.

The Sisters of Charity also objected to the development on the grounds that it encroached on their boundary, and their privacy would be compromised.

Separately, the order last month said they had a private cemetery in the convent grounds in Donnybrook where both sisters and residents were buried.

They said they could account for the whereabouts of all those who died while working and living in Donnybrook and the death and burial records had been checked by the McAleese Commission.

Justice for Magdalenes Research, which provides support to survivors of the institutions, said the Donnybrook laundry was the last to still contain much of its contents from when it was used as a laundry, and the State was “morally obliged” to buy the building from its owners so it could be preserved as a historical record.

A spokeswoman for the developer said it intended to submit a new application for the site.