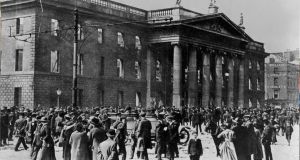 Crowds outside the GPO in Dublin in the aftermath of the Easter Rising. The details of the national conference on the 1916 Easter Rising have been announced. File photograph: Alan Betson/The Irish Times

The details of the national conference on the 1916 Easter Rising have been announced.

The conference is one of the last setpiece events of the centenary commemorations.

The theme of the conference will be 1916-2016: The Promise and Challenge of National Sovereignty.

Participants will include Prof Roy Foster, the vice-chancellor of the University of Oxford, the political theorist Prof Philip Pettit and Prof Clair Wills from Princeton University.

Speaking at the launch of the conference in NUI Galway, Mr Kenny said the event will “facilitate the exchange of views and opinions about the past, and how our understanding of the past can help us shape the future.

“The wide-ranging events around the conference will extend and enlarge the conversation [and] bring in new audiences and perspectives.”

Minister for Arts and Heritage Heather Humphreys said 2016 had been an extraordinary year for the country.

She said the theme of the conference will be “to look to the future and explore ways in which we can build on the positive experiences of our centenary year”.

In addition to the conference itself, there will be a fringe programme of talks, exhibitions and performances.

Broadcaster Hector Ó hEochagáin will convene a special sitting of the 2116 parliament, where 10 guest speakers will each deliver a five-minute motion, after which questions will be taken from the floor.

Meanwhile, artist Sian ní Mhuirí will present 16 and Rising, a work about a modern revolutionary organisation planning an insurrection in order to transform Dublin and challenge the survival of the 32nd Dáil.

Dublin International Film Festival: A guide to the best movies
8