Busaras architect’s block to go as part of work

Demolition started this morning of a Dublin City Council complex of more than 200 flats.The Charlemont Street flat complex is due to be redeveloped as a public-private partnership scheme including shops, restaurants, offices and apartments 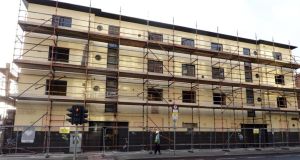 The Charlemont Street flats in Dublin which are due to be demolished. Photograph: Eric Luke

Demolition has started today on a Dublin City Council complex of more than 200 flats, which includes a unique block designed by Busaras and Abbey Theatre architect Michael Scott.

The Charlemont Street flat complex near Ranelagh was to have been redeveloped as a public-private partnership scheme including shops, restaurants, offices, as well as 260 new apartments. However, despite beginning demolition today, including razing Scott’s 1944 building Ffrench Mullen House, the council has been unable to finalise a deal on the regeneration project.

Alcove Properties was granted planning permission for the redevelopment of the five-acre site between Charlemont Street and Richmond Street South in May 2011. It had applied to build five blocks ranging up to eight storeys, but An Bord Pleanála directed the maximum height of any block would be six storeys. The board also reduced the number of apartments permissible to 253 and ordered the alteration of five two-bedroom apartments to larger one-bed units.

The company submitted a revised application which sought small adjustments to the amount of office and retail space and the addition of four apartments. It also applied to add a sixth-floor “roof element” to one block. The board last April granted most of the amendments, but refused the addition of the sixth floor.

Since then the project has remained in limbo with the council unable to achieve agreement for the redevelopment to begin. However it has now decided to demolish the detenanted blocks, including Ffrench Mullen House, which have become increasingly derelict.

Ffrench Mullen House was named after Madeline Ffrench Mullen who developed the nearby St Ultan’s Hospital for Women and Infants in 1919 in response to the dire socioeconomic conditions in Dublin.

Its demolition was approved by the council several years ago for an earlier development, but this project was subsequently abandoned. During the planning hearing for the regeneration scheme, the Department of the Environment described the decision to destroy the building as “regrettable” but accepted it had already been sanctioned.

Independent city councillor Mannix Flynn in recent months sought to save the building, saying its demolition was ethically wrong given the block was a “one-off social housing unit, designed by Michael Scott in 1944 during the Emergency”, and that it should be reused.