Cabin in which Shackleton died may come to his Kildare birthplace 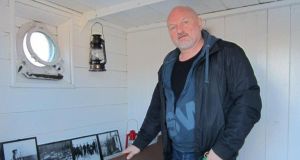 Ulf Bakke in Ernest Shackleton’s former ship’s cabin, which has been on his family’s farm since the 1920s.

When Ulf Bakke was a small boy staying with his grandparents on a farm above the Arctic Circle in northern Norway, he would often be asked to go and fetch something from “the Shackleton” down the garden.

Bakke didn’t think too much about it, but when he was a little older he researched the name of this stout wooden shed. True enough, it was the cabin in which Irish polar adventurer Ernest Shackleton spent his final few hours before he died of a heart attack in early 1922.

“You’re always wanting me to give up things, what is it I ought to give up?”had been the explorer’s last words, speaking from his bunk in the cabin to his friend and medical doctor Dr Alexander Macklin.

“Chiefly alcohol, boss, I don’t think it agrees with you,” Macklin had recalled replying – only to get no response back.

Shackleton passed away in the small hours of January 5th, 1922, while anchored off the whaling station at Grytviken on South Georgia. Ironically, that station had been synonymous with his survival and that of his fellow adventurers on his expedition to cross the Antarctic continent six years earlier.

This return to the Antarctic had several aims, one of which was to help clear Shackleton’s debts. The cabin in which he slept was a new addition to the Norwegian schooner-rigged steamship, renamed Quest , which he acquired for the voyage. After his death, the ship continued on its journey under the command of Frank Wild, calling into Elephant Island en route back to England that summer. In 1923 the vessel was bought back by its original Norwegian owners.

And that’s where Ulf Bakke’s family came in. The Quest continued in service, working as a minesweeper during the second World War, and eventually sank during a seal hunt off the coast of Labrador in 1962, with no loss of life. However, before it went to sea again, Ulf’s great-grandfather, shipyard-owner Johan Drage, had had the cabin removed.


Shoot-out
It was transported on a horse-drawn carriage to his farm at Saltdal near Rognan in Norway’s Nordland region, where it was used to store equipment. At one point during the second World War, several Allied solders who were trying to stop the Germans crossing the Arctic Circle used it to hide behind; unfortunately, they were shot dead and were buried in the tiny Norwegian community, along with 24 Irish, Scottish and English colleagues.

Eventually the cabin passed to Ulf, who felt it was his duty to maintain it for historical purposes.

“It was built of very strong wood, and my grandfather took great care of the roof,” he recalls. “My mother and uncle used it as a playhouse, and I remember that there were always photographs of ships inside it. It turned out that the fittings and the photographs were all original.”

Enter Corkman Eugene Furlong, who was in a pub on the Norwegian Lofoten Islands in 2008. He got chatting about adventurers such as Nansen, Scott and close Shackleton associate, Kerryman Tom Crean.

“This man told me that the cabin in which Shackleton died was in a museum in Rognan,” Furlong says. “I then heard it was going to be sent to South Georgia, as that’s where he is buried.”


Emotional
Furlong was put in touch with Ulf Bakke, and asked if he could visit. “When I walked into the cabin, it was quite emotional as it struck me that I was the first Irish person inside it since Shackleton died,” he recalls.

He was also struck by the fact that it was almost intact, fitting the description of a “tabloid apartment” given of it by James Marr, one of two boy scouts invited onto that last voyage by Shackleton, in his account, Into the Frozen South .

“Don’t, please, carry away . . . an impression of a sumptuous state-room,” Marr had written. “This sea-bedroom was little better than a glorified packing-case; it measured seven feet by six, and when you were in you felt half-afraid to draw a full breath in case you carried something away or burst the bulkhead apart.”

“The door of this cabin opened onto the after-side; and on the port side was the bunk, stretching the entire length of the room, with drawers beneath and a single porthole above,” he wrote.

“A small washstand stood against the forward bulkhead; shelves well-fitted with books on the starboard side, and a small, collapsible chair completed the more elaborate furnishings. In addition . . . was a small white-enamelled cabinet fitted with an oval mirror in the door, and an emergency oil-lamp for use when the electric supply gave out.”


Birthplace
Furlong and Bakke hit it off, and the Corkman suggested that the explorer’s Co Kildare birthplace might be a more fitting place to show the cabin than South Georgia.

Last month, Athy Town Council hosted a reception for Bakke, and he met representatives of the Athy Heritage Museum and John O’Reilly, manager and curator of the Shackleton/Endurance exhibition in Dún Laoghaire, to discuss a long-term loan.

Legal agreements have to be finalised, but Bakke says he was impressed by the keen interest shown here. Kevin Kenny of the Ernest Shackleton Autumn School, held annually in Athy, points out that the Co Kildare town is the only place in the world to have a permanent exhibition to the explorer. For the birthplace to have the cabin would “complete the circle nicely”.