Michael Flatley and others have made donations in effort to raise €830,000 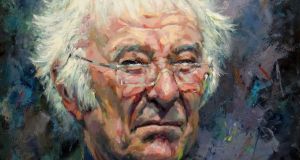 James Brohan’s painting of poet Seamus Heaney is one of the highlights of the collection, and is currently on display at Barbara Stanley’s gallery in Mayfair

Leading Irish artists, including Lord of the Dance star Michael Flatley, have donated paintings to raise funds for the Irish Cultural Centre in London, which is being rebuilt.

One of the highlights is James Brohan’s painting of the poet Seamus Heaney, which is on display at Barbara Stanley’s gallery in Mayfair in London.

Following an agreement last year with the local Conservative-controlled Hammersmith and Fulham council, the Irish Cultural Centre struck a deal with the Shepherd’s Bush Housing Trust that will see a home for the centre, plus affordable housing.

The project has been hit by delays, but it is now hoped that it will be handed over to the centre late this year for fitting out before a formal opening next year in time for St Patrick’s Day.

The display will include a work from Flatley, who has produced a series of paintings where he has danced with paint-tipped shoes on canvas. Some have achieved prices of more than £50,000.

Meanwhile, the centre is hoping to sell the naming rights to its new home, which is near one of the busiest roundabouts in London, to a major Irish business, said its new general manager, Collette Mackin.

“Many have significant operations in the UK and we are sure many of their customers and employees visit the centre. Irish art and culture is good for business and we hope that businesses will now approach us,” she said.