An Irishman’s Diary on a patriot for our times 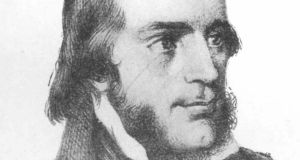 Thomas Davis is a patriot for our time. As WB Yeats remarked, the achievements of this cultural nationalist, journalist and poet – the bicentenary of whose birth we are commemorating – were of a moral nature. Yet he was no more naive than another idealist, GB Shaw, who wrote: “You see things and say ‘why?’ But I dream things that never were and say ‘why not’.”

Davis maintained that the doctrine associated with Young Ireland – a nationality embracing the people of the whole country – was “made in the historical societies of Dublin and belongs to Trinity College Protestants and a few Roman Catholics of TCD”. His earliest confederate was John Blake Dillon (the bicentenary of whose birth also occurs this year). Dillon succeeded Davis as president of the Historical Society. His presidential address in 1841, scarcely less than that of Davis, set the tone for the Young Ireland group.

Dillon’s subject was “Patriotism”, in which he emphasised Davis’s teaching on duty to one’s country. The two friends dabbled in political journalism and joined O’Connell’s Repeal Association. Dillon admired the writing of Charles Gavan Duffy, first among the journalists of his day, and told Davis: “A weekly paper conducted by that fellow would be an invaluable acquisition.” Thus began what TW Moody called “the most notable journalistic venture in Irish history”. The editorship of the Nation was assigned to Duffy as the more experienced journalist, but he acknowledged: “Davis was our true leader. Not only had nature endowed him more liberally, but he loved labour better, and his mind traversed regions of thought and wrestled with problems still unfamiliar to his confederates.”

The prospectus written by Davis had an immense influence then and on subsequent generations: “Nationality is their first great object – nationality which will not only raise our people from their poverty by securing to them the blessing of an independent legislature, but inflame and purify them with a lofty and heroic love of country – a nationality . . . which may embrace Protestant, Catholic and Dissenter – Milesian and Cromwellian – the Irishman of a hundred generations, and the stranger who is within our gates.” The Nation’s print-run sold out on the first day of publication, October 15th, 1842, and within a short time had a higher circulation than any other newspaper in Ireland. Its editorial policy was derived from Grattan and O’Connell, but its latent “tone” was Wolfe Tone. The journal succeeded, Davis asserted, because it “was written by men smarting under the sight of the people’s misery and mad at their country’s degradation”. To Pearse, “the sorrow of the people affected Davis like a personal sorrow”.

At the outset O’Connell welcomed the vigorous propagandists, while they accepted him as the patriarchal leader of the agitation for repeal of the Act of Union. When his campaign collapsed the following year, differences in age, experience and outlook emerged between O’Connell and the Nation group. Disillusionment was tinged with bitterness as the young intellectuals, committed to integrated education, clashed with the Liberator over the Colleges Bill.

When Davis died suddenly on September 16th, 1845, Dillon wrote to Duffy: “This calamity makes the world look rather bleak. God knows I am tempted to wish myself well out of it.” His death coincided with the beginning of the Great Famine. Ill-fate deprived the Young Irelanders of the one leader who might have directed their energies effectively during the most cataclysmic event in modern Irish history.

The school of Davis associated patriotism with morality, self-reliance and national reconciliation. John O’Leary, the literary Fenian who in turn would inspire the youthful Yeats, recalled: “In so far as I have fought the good fight, to Thomas Davis more than any other, or indeed more than to all others, is the credit due.”

Following 1848 insurgence, Dillon escaped to temporary exile. He died in 1866, a year after being elected MP for Tipperary so full of promise – which was realised in the parliamentary career of his son, John.

The Young Irelanders gave us the Tricolour as a symbol of national unity. Davis believed “Orange and Green shall carry the day.” His philosophy of an inclusive nationality can help us to fulfil the dream of reconciliation, and to assimilate our immigrant population.