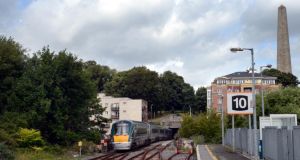 It is not every day that a contributor to An Irishman’s Diary has a special train laid on for him and what’ s more, is given a pass to travel in the driver’ s cab.

But that’s what happened to me recently, when Irish Rail allowed me to travel on an out- of-service train between Connolly and Heuston stations in Dublin to see the Phoenix Park rail tunnel. Two other tunnels on the rail system are longer but an intense mythology has grown up around the one that runs beneath the Phoenix Park.

The tunnel’s construction started in 1875 and was the result of intense rivalry between two privately-owned railway companies, the Great Southern & Western and the Midland Great Western. The former operated from Kingsbridge, now Heuston, but didn’t have access to the North Wall, which was controlled by the latter company.

So the Great Southern & Western built the tunnel under the Phoenix Park in just over two years. Building work uncovered an unusual find, the remains of about 35 Vikings, mostly male warriors, complete with swords, shields and spears. Despite that, the tunnel was built in far less time than it took to build the admittedly longer Dublin Port tunnel, with far less controversy.

During the second World War, the tunnel was used to store food supplies, so it became a gigantic larder, just as over-ground, in the Phoenix Park, great stacks of turf were built.

Since then, the tunnel has continued in use, including for GAA specials taking fans to Croke Park for all-Ireland finals. Hassard Stacpoole has an encylopedic knowledge of the historical workings of the Irish railway system; he is a son of George Stacpoole, the noted Limerick antiques’ dealer. Hassard himself now works in London.

He says that scheduled passenger services ran through the tunnel until June 2001. On Sundays, there was even a late afternoon service from Galway to Dundalk and an evening one from Limerick to Drogheda. Up to the 1980s, the tunnel was used for daily mailboat services between Dún Laoghaire and Heuston. Even earlier, around 65 years ago, the tunnel facilitated through trains from Cork via Dublin to Belfast, although it seems most unlikely that those will be revived.

It was on an out-of-service train that I made my recent trip, in the company of Jim Evans, the driver, and John Magee, a district traction executive.

On the way there, after Connolly, the train sidled past Croke Park, through Drumcondra station, until it reached Glasnevin junction.

There, trains turn one way for Maynooth and Sligo, the other way for Heuston, through the tunnel.

When the train returned from Heuston, as it approached the tunnel mouth under Conyngham Road, I could see in the spring sunshine the Wellington Monument perched almost above the tunnel. It also runs beneath Garda headquarters.

From mid-2016, four trains an hour at peak periods are set to run from the Kildare direction through to Grand Canal Dock, catering for the growing numbers of commuters from Co Kildare. Off-peak, there will be one train an hour through the tunnel. The service won’ t start until signalling work has been completed, so the exact start date hasn’t been announced.

The tunnel at Bray Head at 1,000m is longer than that in the Phoenix Park. Longest of all is the tunnel that burrows for just over 1,200m beneath Cork’s northside and in to Kent station. That is almost twice the length of the Phoenix Park masterpiece.

There’s also the Gogginstown tunnel beneath Ballinhassig, just south of Cork city. It was once part of the old West Cork Railway system but has been closed since 1961. With permission from the landowner, it’s perfectly possible to walk through this deserted 828m tunnel.

Bravo! The winners of the 23rd Irish Times Irish Theatre Awards are here
3

Ciara Kelly’s Isolation Diary: ‘The virus is outside the door, but we’re still ripping the p*** out of each other’
7