An Irishman’s Diary on Sir Edwin Lutyens and Ireland

A giant of architecture’s links to Ireland 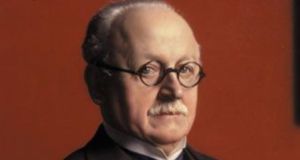 Two misconceptions persist about Sir Edwin Landseer Lutyens, that he was the quintessential British architect of the early 20th century and that he was an architect of empire. Both conceal two statements of fact: Lutyens’s mother, to whom he was very close, was Irish, and he also left a fairly substantial body of work here in Ireland. Lutyens’s mother was Margaret Theresa Gallwey, called Mary all her life. She was born in Ballincollig, Cork, in 1833; her family came from Killarney. Her father Michael was an RIC officer. Mary went on to marry Charles Lutyens in Montreal in 1852. She was the sister of a brother officer of Charles. They went on to have 13 children; Edwin was the 10th, but as a result of the rheumatic fever he suffered as a child, he was the only one of the Lutyens boys who never went to public school or university. He had some education at art school, but managed to set up his own architectural practice in 1888, when he was 19.

Lutyens, usually called Ned, never lost his youthful shyness, but had a reputation as the perfect party guest, always high spirited and witty. He had many Irish friends, including Gogarty, Laverty and Orpen. He made up his own word for the fun he enjoyed – “vivreations” . He was also a keen spectator at the Tailteann Games in Dublin in 1924.

His marriage was far from successful, although it produced five children. In 1897, he married Emily, daughter of the first Earl of Lytton, but almost from the start, the marriage was very unsatisfactory. Emily went on to show much more interest in eastern religions, slightly ironic in view of Lutyens’s work in India.

His design style at first reflected the Arts & Crafts movement, then it became more classical, as his work moved from designing private residences to large-scale public edifices. Among his works here, he designed a new wing for Howth Castle in 1910/11, including a library and chapel. At the same time, he carried out a major upgrade of the 16th-century castle on Lambay Island, off the north Co Dublin coast. The island had been recently bought by Cecil Baring of the famous banking family; the bank itself collapsed in spectacular fashion 20 years ago. The island’s present owner is Alex Baring, the seventh Baron Revelstoke, who has plans to turn the castle into a holiday destination.

In his earlier years, Lutyens had a great propensity for attracting wealthy clients. Another of his Irish designs was a substantial holiday home near Downings in north Co Donegal, Tranarossan House, for the Hon Mrs Phillimore. Yet another titled client was Sir E Hucheson Poe, for whom Lutyens designed the Italianate Heywood gardens in what is now Co Laois. For this, he used 10 salvaged capitals from the Commons chamber in the old Irish parliament at College Green. He worked with his great collaborator, Gertrude Jekyll, a noted garden designer of the time. Today, the gardens are owned and managed by the OPW, although Heywood House itself is long gone.

Lutyens also transformed a fishing lodge at Casla in Connemara into a villa, to which the owner, Joseph Bruce Ismay, chairman of the White Star Line, retreated after the Titanic disaster in 1912. Again, Gertrude Jekyll created the gardens. Ismay lived in the villa until his death in 1939. The great architect also did one piece of church work in Ireland, an altar and frame at St Patrick’ s church on Upper Donegall Street, Belfast. The triptych was created by Lavery.

These days, Lutyens is well remembered for his two designs for a municipal art gallery in Dublin to house the Lane collection. One design was for a gallery suspended over the Liffey, while the other was for a gallery on part of the park in St Stephen’ s Green, opposite the Royal College of Surgeons. Both plans were rejected. Eventually, 20 years later, the the municipal gallery opened at Charlemont House on Parnell Square. Lutyens’s work in designing the war memorial gardens at Islandbridge is also well recorded, commemorating those from Ireland who had died while serving during the first World War. He worked on this with TJ Byrne, chief architect of the OPW, and the gardens opened in 1940.

Outside Ireland, Lutyens is highly regarded for such monumental works as the Cenotaph in Whitehall, London, and his work in New Dehli. Construction of his spectacular design for a new Catholic cathedral in Liverpool was abandoned in 1941. Lutyens died in 1944. Part of his legacy is his work in Ireland, despite the failure of his plans for a new municipal gallery in Dublin, and it’s all a tribute to his own Irish heritage.