An Irishman’s Diary on medievalist and writer Helen Waddell

A life of scholarship and literary celebrity 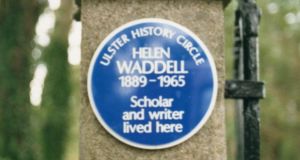 “At school in Belfast and at the then small and nascent Queen’s University, her literary and social abilities were quickly noticed. But life during Helen’s twenties was largely fallow as she looked after her stepmother at their modest home in north Belfast, a far cry from the exotica of Tokyo.”

Helen Waddell died almost 50 years ago and her status as an Irish literary superstar in the 1930s is almost forgotten, except in certain academic circles, yet she had an extraordinary mind and career to match.

Her origins were truly exotic. She was born in Tokyo in 1889; her father was a Presbyterian missionary. Tokyo in those far-off days was largely undeveloped, long before it became a metropolis. Many traditional aspects of Japanese life had an indelible effect on her.

She spent the first 11 years of her life in Tokyo before the family returned to Belfast, where her mother died shortly afterwards. Her father remarried, but he too soon died and Waddell found herself in the care of her stepmother.

At school in Belfast and at the then small and nascent Queen’s University, her literary and social abilities were quickly noticed. But life during Helen’s twenties was largely fallow as she looked after her stepmother at their modest home in north Belfast, a far cry from the exotica of Tokyo.

Her stepmother Martha was a domestic tyrant, besides becoming a secret whiskey addict. It wasn’ t until Martha died in 1920 that Helen was able to escape this stultifying home atmosphere.

By the time she went up to Oxford at the age of 31, her hair was already streaked white. But her immense skills in medieval studies were soon apparent, heightened by the two years she spent in Paris in the mid-1920s.

Her lectures at Oxford and elsewhere drew audiences that today would almost compare with rock-star status.

After Paris, she settled in London, which she loved, although she made frequent trips home to see her family in Co Down, except during the second World War.

She worked for a noted London publisher, Constable, which also published her works. She also had a long affair with the elderly Otto Kyllmann, the chairman at Constable. She had many suitors, but never married.

Her first big literary success was The Wandering Scholars, in 1927, a study of the medieval goliards, devoted to conviviality, licence and the writing of ribald and satirical songs in Latin. In 1933, her only novel, Peter Abelard, the medieval love story of Abelard and Heloise, was published and it was an incredible success, with 15 printings in its first year. It also made her a lot of money and she defied her many friends, one of whom warned her that a writer should never buy a house. Helen did just that, at Primrose Hill Road, close to Hampstead in north London.

With the publication of Peter Abelard, Helen Waddell, who already knew most of the then current literary “greats” , was propelled into mega-stardom, just like any top selling chick-lit author today, except Helen’ s work was grounded in intense academic research. Her closest friend on the literary circuit was AE, George Russell, a fellow Northerner, from Lurgan.

The then prime minister, Stanley Baldwin, became a firm friend, introducing her to another fan, Queen Mary, wife of the king.

Living in London during the second World War was a recipe for chaos, and when a bomb fell on her house later in the war, the damage it caused took several years to put right. But in 1942 she took part in a protest against the death sentence imposed on six young IRA men in Belfast who had shot dead RUC policeman Patrick Murphy, Catholic and father of nine children.

She wrote a letter to the London Times pleading clemency. In the end, the leader of the six was the only one hanged.

By the end of the war, her career was beginning to fade, along with her fine literary skills and her extraordinary understanding of religion, including Catholicism. By the time she was 60, she was starting to develop dementia. She died in 1965, at the age of 76, by which time it had totally engulfed her.

Although she died in London, she was buried close to Banbridge, Co Down, in the graveyard of the church with which her family had many connections and near the home of her sister, Meg, to whom she had been particularly close.

Waddell’ s life had been one of immense literary erudition and great writing skills, but today, her best-selling works about the medieval world are no longer fashionable.