An Irishman’s Diary: Aid and the Great Famine

Recalling worldwide response to a calamity 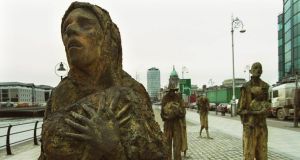 A view of the Famine memorial in Dublin. Photograph: Frank Miller

In 1877, a generation after the Great Famine, the historian AM Sullivan wrote that the people of the south and west mingled praise and blame in respect of nearly every relief agency that had come to their aid but had “naught save grateful recollection of the unostentatious, kindly, prompt, generous and efficacious action of the Friends’ Committee”. Four generations later, the memory of what the Quakers did for our ancestors remains green but perhaps it overshadows the contributions of many other organisations and groups in what was the first worldwide response to a crisis in a particular country.

The contribution of $170 by the Choctaw Indians of Ohio, made through the Quakers, is also remembered but it was only a small fraction of the help that came from the United States. In February 1847, Vice-President George Dallas held a meeting attended by 33 senators and 11 members of the House of Representatives, including Abraham Lincoln, to discuss aid for Ireland and, a month later, Congress authorised the secretary of the navy, John Mason, to have two sloops, the Jamestown and the Macedonian stripped of their armaments and loaned to transport provisions to Ireland. This was the only time that the navy lent ships to civilians. The Jamestown arrived in Cork in March 1847 with 800 tons of food provided by the people of Massachusetts and the Macedonian followed in July. The captain of the Jamestown, George de Kay, who had been instrumental in obtaining the ships, paid the cost of the return trip, about £4,000. More than 100 other cargoes of food also came from the US.

Money for Ireland was also collected in Mexico, Argentina, Russia and in outposts of the empire including Canada, Australia, India and the West Indies.

In March 1847, Pope Pius IX took the unprecedented step of issuing an encyclical urging Catholics throughout the world to “assist the Irish who are now tormented by hunger and worn out by pestilence”. He contributed 1,000 scudi (about £220) and authorised the preaching of sermons in Rome that raised 1,100 scudi.

Perhaps the most unusual donation came from the 24-year-old sultan of the Ottoman Empire, Abdul Medjid Khan, who gave the equivalent of £1,000 and offered £10,000 but was advised by the British ambassador not to upstage Queen Victoria.

Because of what Sullivan describes as the “frenzy of reproach against the government of that day for its lack of more prompt and competent action”, the contributions of individuals in Great Britain, what he called “their noble generosity” were almost forgotten. He records that “from every considerable town in England there poured subscriptions, amounting in aggregate to hundreds of thousands of pounds”.

The single largest relief organisation was the British Association for the Relief of Distress in Ireland and the Highlands of Scotland, founded by a Jewish banker, Lionel de Rothschild, in January 1847. It raised £600,000 and spent most of it in Ireland.

Victoria has been excoriated as the “famine queen” but she contributed £2,000 to the Association and £500 to a Ladies Clothing Association.

In addition, she made two appeals which were read in Anglican churches in December 1846 and May 1847. The first raised about £170,000 but the second garnered only £30,000, probably because of what we would now call compassion fatigue. Members of her family donated £3,700.

Irish people already in England also contributed including workers building a railway line from Liverpool to Bury who gave a day’s pay.

The number of paupers who arrived in British ports during the Famine is unknown but, for example, at a peak, in mid-1846, Liverpool, with a settled population of about 250,000, had over 100,000 Irish people in transit to North America or seeking shelter in England. Relations between the arrivals and the locals were occasionally fraught and the living conditions were horrendous but, by and large, the story, insofar as it has been told, reflects well on the residents of the ports who found themselves in impossible situations.

In June 1997, on the 150th anniversary of the Famine, the British prime minister, Tony Blair, expressed regret that “those who governed in London at the time failed their people through standing by while a crop failure turned into a massive human tragedy”. They did, but many other British people did not and they too deserve to be part of the annual National Famine Commemoration on May 11th.