Russian Bolsheviks and Indian nationalists among those inspired by seminal revolt 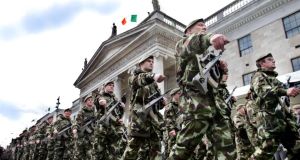 The Easter Rising was a “world historical event”and not just an Irish affair, a conference has been told.

Prof Luke Gibbons of NUI Maynooth said the perception the Easter Rising was a mere sideshow to the first World War needs to be addressed in the forthcoming commemorations to mark the centenary of 1916.

Both Leon Trotsky and Vladimir Lenin, the architects of the Russian Revolution, understood the significance of the Rising, and its implications stretched far beyond Europe, he suggested.

Prof Gibbons, professor of Irish literary and cultural studies at NUI Maynooth, was speaking at the Theatre of War symposium in the Abbey Theatre in which he quoted numerous sources abroad who understood the significance of the Rising.

The Rising blasted “the widest breach in the ramparts of the British empire since Yorktown”, according to Piers Brendon, in his The Decline and Fall of the British Empire 1781-1997.

The Times of London blamed the Amritsar massacre in April 1919, when the British Army shot 380 Sikh civilians dead, on the agitation which had begun in Ireland.

Historian Keith Jeffery held the Irish experience “played a crucial role in the disintegration of the British empire”.

Prof Gibbons said the determination of the Easter Rising participants to challenge the British empire had to be seen in the context of the time.

Irish Parliamentary Party leader John Redmond had stated that the principle of Home Rule had made the British empire “our” empire.

In supporting British involvement in the first World War, Redmond explained: “Our representatives on the floor of the Imperial parliament in Westminster [will do] everything in our power to increase the strength and glory of what will then be our empire at long last.”

In this, Redmond was supported by The Freeman’s Journal, then a voice of nationalist Ireland, which stated: “[His decision] has vindicated the empire’s share in the present great war of liberation. Ireland has spread its roots into the British empire. From India in the east to Canada, from the southern ocean to the northern seas, the Irish race has had its share in the making and in the defence of the colonies.”

Roger Casement said the cause of Ireland was also the cause of India, and the Irish rebels were fighting “to join again the free civilisations of the Earth”.

Prof Gibbons said traumatic events were often not understood until long after they finished.

This phenomenon was identified by Sigmund Freud as “belatedness” or “Nachträglichkeit”.

This was the notion that an experience is not fully registered at the time, but has to await memory or representation particularly in artistic form.

For that reason, for instance, Francis Ford Coppola had made Apocalypse Now after and not during the Vietnam War.

Prof Gibbons suggested there were many books,pamphlets and plays from the aftermath of the Easter Rising that should be republished to give people the context of the time.

He criticised the official programme for the decade of commemorations for concentrating on newspaper accounts and State papers, rather than on the testimonies of “novelists, dramatists and poets - the surveyors of back-stage society”.

The emphasis should be on how events are understood and how memory is passed on not, just on what happened during the events themselves, he explained.