1916 medal awarded to Joseph Plunkett up for auction 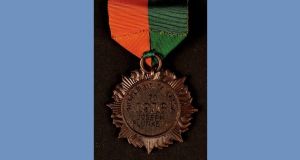 The 1916 Rising medal posthumously awarded to Joseph Plunkett, one of the seven signatories of the Proclamation, has turned up and will be sold at auction in Dublin in March.

The 1916 Rising medal posthumously awarded to Joseph Plunkett, one of the seven signatories of the Proclamation, has turned up and will be sold at auction in Dublin in March.

Plunkett – one of the central figures in the Easter Rising — fought in the GPO where his aide-de-camp was Michael Collins. He was subsequently arrested, court-martialled by the British and executed.

The Kilmainham Gaol authorities allowed him to marry Grace Gifford a few hours before he died.

In the 1940s, the government issued medals to surviving combatants and to the next-of-kin of those who had died in the Rising.

Whyte’s Auctioneers in Dublin said Plunkett’s medal had been consigned to its history sale scheduled for March 13th.

“The medal is die-stamped with Plunkett’s name to the reverse and numbered ‘70’. On issue, the medal was sent to Plunkett’s wife Grace (nee Gifford),” auctioneer Ian Whyte said.

Mr Whyte said “Cathal Gannon was a friend of Grace Gifford Plunkett and in 1941 discovered that she had thrown the medal into her dustbin due to her antipathy to the government. Gannon retrieved it and Grace Plunkett told him to keep it as she didn’t want it”.

Mr Gannon later gave the medal as a gift to the current, unnamed owner who is selling it.

Mr Whyte said “many Republicans in the 1940s were disgruntled with de Valera for turning against fellow-Republicans and even hanging some of them” which explains their antipathy to the medals.

Of the seven signatories of the Proclamation, the whereabouts of six of the medals had been known but until now, Plunkett’s medal had been missing. Six of the medals are in private hands; only that awarded posthumously to Patrick Pearse is in State ownership (at St Enda’s in Rathfarnham).

Ms Gifford’s wedding ring, bought from a jeweller named Stoker in South King Street on her way to Kilmainham Gaol to marry Plunkett, has not come to light.

After Irish Independence, Grace Gifford Plunkett, who opposed the Anglo-Irish Treaty that established the Irish Free State, was jailed for a time during the Civil War. She later pursued a career as an artist and cartoonist. She died in 1955 aged 67.