Maurice Dease, a Royal Fusiliers lieutenant from Co Westmeath, died on the first day of British fighting in the conflict 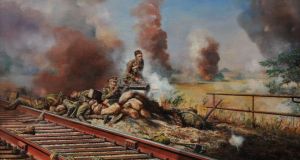 Fallen: a dramatic reconstruction by the war artist David Rowlands is based on accounts of Dease’s defence of the railway bridge at Nimy

One hundred years ago today Lieut Maurice Dease, an Irish soldier serving with the British Expeditionary Force in Belgium, was in charge of a machine-gun section of the 4th battalion of the Royal Fusiliers.

On the force’s first day of combat, on August 23rd, 1914, this infantry outfit was told to hold a railway bridge over the Mons-Condé Canal at Nimy, outside the town of Mons. Lieut Dease manned a machine gun with a clear line of fire across the canal. Another gun covered the entrance to the bridge.

They fired as the German army approached. Some estimates say 500 of the Germans were killed or injured in the first 10 minutes of the battle, but it quickly became apparent that the 80,000 troops of the British Expeditionary Force, as the field army sent to the Continent was known, were facing twice as many enemy soldiers.

Then the machine gun guarding the bridge jammed, putting the fusiliers’ lives in even more danger. Dease decided to run the gauntlet of enemy fire and fix the gun. When he was hit in the knee he returned to his post, only to be hit again in the calf and neck. He died manning his machine gun. For his actions Dease won the first Victoria Cross of the first World War, one of five awarded that day.

In these early stages of the conflict the brutal reality of trench warfare had yet to take hold, and Dease’s Victoria Cross is among the best remembered of the war. His portrait hangs in the hallway of the Fusilier Museum at the Tower of London. The painting, commissioned by his family from a photograph, depicts a proud, purposeful-looking 24-year-old.

A dramatic reconstruction by the war artist David Rowlands is based on accounts of Dease’s actions.

Dease is one of a series of notable firsts involving Irish-born soldiers in the British army. The first Victoria Cross of the second World War was also won by an Irishman, Harold Ervine-Andrews, from Cavan, who, by coincidence, went to the same school as Dease, Stonyhurst College, in Lancashire.

The first Victoria Cross ever awarded went to Charles Lucas, from Armagh, a midshipman during the Crimean War. The first army Victoria Cross went to Luke O’Connor from Roscommon.

President Michael D Higgins’s presence at the official British commemoration earlier this month at St Symphorien, the cemetery outside Mons where Dease and dozens of other Irishmen are buried, was an acknowledgment by both the British and the Irish governments of the Irish contribution to the British war effort.

The President met Maurice and Patrick French, nephew and great nephew of Maurice Dease. “He spoke of the good feelings now between the two countries,” says Maurice French, a retired British army major who served in the Korean War.

French describes the Deases as “minor landed gentry”. They settled in Turbotstown, near Coole in Co Westmeath, in the 1200s. Unlike many of their class, they were staunch Catholics. Maurice Dease was sent to Stonyhurst at an early age; the Jesuit boarding school turned out Irish middle-class boys for the British army until the end of the second World War.

After his death, Lieut Dease’s parents received a traumatic series of telegrams. The first said he was wounded; the second said he was missing; the third confirmed his death. The Victoria Cross arrived in the post shortly afterwards.

Last year the British government announced that the 628 Victoria Cross winners of the first World War would each have a paving stone installed in their honour in their home towns – but that those born outside what is now the UK would be excluded.

That controversial decision was reversed. The Commonwealth War Graves Commission, with the support of the Irish Government, has agreed that all 24 Victoria Cross winners from the Republic will also each have a paving stone. Lieut Maurice Dease’s will be unveiled this evening at Glasnevin Cemetery.

Courage under fire: Other Irish Victoria Crosses
Michael O’Leary The Cork-born soldier won a Victoria Cross for rushing an enemy barricade, killing three Germans and capturing two others, in February 1915. His face was used in a well-known recruiting poster in Ireland.

Martin Doyle Doyle, from Wexford, single-handedly stopped a machine gun that was firing at a British tank. He went on to join the IRA and fight in the War of Independence.

William Kenny Drummer Kenny from Drogheda was one of the first winners of the Victoria Cross during the war – and, at 34, one of the oldest. During the first Battle of Ypres he knocked two machine guns out of action and conveyed urgent messages under fire.