Has women’s thought been devalued?

Philosophy stands accused of being the most chauvinistic branch of the humanities, with a 5:1 ratio of men to women 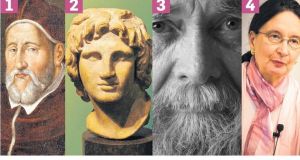 Spot the philosopher: who is the great thinker? Answer at the end of the piece

You don’t need a beard to get ahead in philosophy, but being a man certainly helps. That’s according to the Society of Women in Philosophy Ireland (Swip-I), which is holding its biggest conference in Dublin this week with more than 45 speakers.

The group, formed in 2010, is part of a growing international movement against perceived prejudices in academia. This has been expressed in stark terms in the blog What Is it Like to be a Woman in Philosophy?, which documents everyday occurrences of sexually demeaning comments and harassment in philosophy departments.

Sometimes it is a case of bad science justifying bad behaviour. There is evidence from psychology and neuroscience that men think differently to women, and from this, some male philosophers (if not men in general) seem to assume, self-servingly, that the difference is qualitative. Whatever the reasons, the discrimination is real, says Dr Clara Fischer, a Swip-I committee member. Today’s idea is her alarming observation: “Philosophy has been shown to be one of the less, if not the least, hospitable disciplines in the humanities for women.”

Why do we need groups such as Swip-I?

“The need lies in the historical marginalisation of women in philosophy and their continued under-representation. Currently, on average only 21 per cent of academic philosophers are women, a figure that compares badly not only with other academic subjects in the humanities, but also with most natural sciences.”

Have women philosophers traditionally been overlooked in the canon of western philosophy? “In addition to the numerical under- representation of women in philosophy, female

philosophers’ work is often disproportionately overlooked in course syllabuses and other teaching materials, nor do we get the same number of citations as male philosophers. This means that it is easy to get the impression that philosophy is primarily a pursuit reserved for people of a certain gender, but also of a certain race and class.”

Is there a problem with ‘everyday sexism’ in academia, and how is it being addressed?

“Many disciplines, particularly in the humanities, have made great strides with regard to the representation of women over recent decades, and have often improved the academic climates that women work in. The Stem subjects, too, are pro-

active in redressing gender inequalities and the under-representation of women.

“While philosophy seems to be lagging behind in this regard, the work of societies for women in the profession, and the openness with which debates are now often conducted on the internet, are gradually having an effect.

“Initiatives such as the Gendered Conference Campaign by the blog Feminist Philosophers, which highlights all-male conference line-ups and the negative effects of women speakers’ exclusion from philosophy forums, are resulting in increased awareness and recognition of the need for change within the profession.

“Swip-I is contributing towards this momentum for reform in an Irish context in a variety of ways: it showcases female philosophers’ work, provides networking opportunities and mentoring, and highlights gender inequalities within the profession.”

Do men and women think differently?

“The debate between those proposing innate gender differences (essentialists) and those proposing learned or socially acquired differences (social constructivists) has been going on, particularly in feminist philosophy, for several decades. One problem with ascribing innate, and therefore unalterable, differences to women lies in the creation of self-fulfilling, negative stereotypes.

“Historically, western philosophy has, for instance, attributed greater reasoning capacities to men than to women. If such attributions are in some way thought to be innate, perhaps rooted in biology, then it might seem legitimate to hold that women are incapable of meeting men’s rationality and are therefore inferior as thinkers, or even as human beings.

“On the other hand, some philosophers have argued that differences in women’s experience of being in the world, of being socialised perhaps to be more caring and so forth, may result in thinking that is different from men’s. The field of feminist care ethics follows this line of thought, where men are believed to be more rules-focused when presented with moral problems, while women may approach these problems in a more affective, relational manner.

“Given feminist concerns regarding ascriptions of innate gender differences, many feminist philosophers approach such theories with caution, especially in light of work by psychologist Cordelia Fine, who questions neuroscientific differences in brain function.

“The scientific evidence on male and female brain function is quite controversial, but some philosophers hold that given the brain’s plasticity, it would be surprising if the different socialising experiences of men and women did not leave a mark on the way our brains are wired.”

Swip-I is holding its annual conference on Nov 21-22 at Newman House, Dublin, on the theme of women’s bodies. swip-ireland.com

SPOT THE PHILOSOPHER: THE ANSWERS