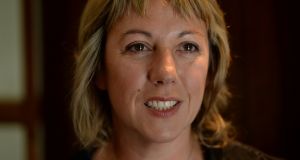 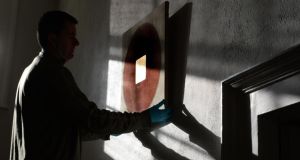 Patrick Scott’s early works, seen in his swansong retrospective at Imma and Visual, cast a spell in January. Caoimhe Kilfeather’s This Attentive Place, at Temple Bar Gallery, Eva Rothschild at the Hugh Lane, and Dorothy Cross at the Royal Hibernian Academy and Kerlin were all strong shows that have stayed with me. Nick Miller was a worthy winner of the Hennessy Portrait Prize, and his new series of elegiac floral paintings at Rubicon Projects made my heart melt. Catch them at the RHA in 2015.

I wasn’t disappointed by Limerick City of Culture, because I hadn’t expected very much in the first place, which is disappointing in itself. Humberto Vélez’s art dog racing at Eva was fun (and I won €50), but Royal de Luxe’s giant granny, while perfectly nice, was also a giantly expensive ***** (insert word of your choice here).

Solar Reserve, by the Irish artist John Gerrard, at the Lincoln Center, in New York. A brilliant meditation on human endeavour, natural forces, life and belief, plus a whiff of the sublime. I’d intended to stay 10 minutes, then tore myself away after more than an hour. Hopefully someone will bring it here in 2015.

Bad video art. Frequently feels like an endurance test. Despite Duncan Campbell winning the Turner Prize in what was the worst shortlist ever, more are muttering about the medium’s style over substance – and there isn’t always any style. The backlash seems to have begun.

The crew who provided the waterproofing for DownstairsDublin on Culture Night. Biblical rain didn’t stop play. Thank you guys – and to all who came, put up umbrellas and took part.

Stop using cuts as an excuse for mediocre shows. Good curation doesn’t cost any more than the bad variety, and poor art is poor art, whatever the economy’s doing. Oh, and nix the theory-laden exhibitions where the words don’t match up to the works.