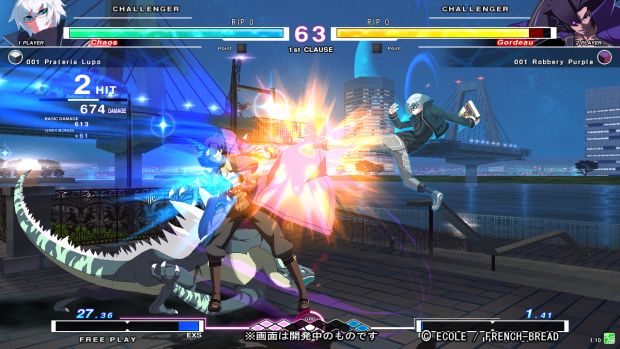 It’s intriguing and heartening to think that game genres never truly die. 2D beat em ups might not be as prominent as they were in the ‘90s, but there are still new brawlers emerging every now and then. It’s also nice to know that arcade cabinets are still rolling off assembly lines, albeit at a much slower rate than 20 years ago.

Under Night In-Birth Exe: Late (what a name) is both a traditional fighting game and a visual novel that has appeared in Japanese arcades. Should you want to, you can read its reams of text that form a YA urban fantasy story. But I imagine most Western gamers will jump straight to the action.

Coated in dynamic and attractive Manga animation and appealing pop music, it’s a very accessible 2D fighter. There are only four function buttons (one of which is block), which makes it easy to pick up, so button mashing is mercifully sparse. But – like the best beat-em-ups – there are hidden depths in the game-play, and more complex moves and combinations to discover. In fact, it’s much more intuitive than many other beat-em-up series, including some better known ones like Mortal Kombat.

The only real flaw in UNIBEL is that it’s not quite as rich as some of its competitors: It’s not as outlandish or colourful as say, Blazblu Continuum Shift (which comes from the same stable), and the combat is more limited than in Tekken, which first emerged more than 20 years ago.

Still, with spirited voice acting (in Japanese with English subtitles), local and online multiplayer experiences, and a beautiful look, Under Night In-Birth Exe: Late is a nimble, diverting fighter that will appeal to fans of the genre.