Gambling and gamboling round the festival circuit

Festival Fit puts the money down 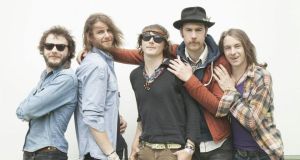 Pack up the bunting, put away the marquees, leave the burgers in the freezer and let every face remain unpainted. If I’m to believe everything I’ve heard about Nick Cave’s stint at Body & Soul, not only did I miss the gig of a the summer, but possibly, of a lifetime. Festival season may have peaked. Some pretty credible witnesses have been whispering in my ear about it and I’ve had a sulk on since. Shamanic levitation and the rock ’n’ roll equivalent of what mass should be like. Makes the Stones’ stint at Glastonbury seem like a bunch of drunk uncles getting up to play Jumping Jack Flash at your cousin’s wedding (Keith being the mad uncle you’d enjoy going for bottles with).

I’m either going to sit in the corner sulking for the rest of the summer with a protruding bottom lip on me, like Angelina Jolie sucking a bit of liver, or make several piles from my festival chips and place them strategically around the roulette table as the summer sessions spin on.

Taking a punt on a festival ticket is always something of a gamble. Do you approach it like the Grand National and bet on a favourite, Electric Picnic at 6/1? Likely to be a winner, but not much in the way of butter vouchers when you leave the bookies. Do you take a risk and plump for something of an outsider, Knockanstockan at 20/1? Could be risky, but would give great return on a smaller stake when it romps home. Or do you back a few fillies, spreading your bets?

This festivalling lark is a tricky business and there can be a few fallers and dismounts as we make our way round the hurdles.

ON THE BALL
As difficult as life is a punter, the gamble involved in organising festivals and lining out a team on the field requires a neck like a jockey’s undercarriage. Every festival-goer and their buddy become the Eamon Dunphy and Johnny Giles of the gig world, while the organisers become the Gaffer whose decisions and selections are critiqued within an inch of their lives. “Robert Smith is a good lad, great experience under pressure, but he didn’t seem fit enough for the full 180 minutes. I would have pulled him off at half-time.”

Pulling off band members is probably something that’s specified in high-rolling riders. A festival organiser told me recently about tens of thousands they lost last year due to the weather. A certain high-profile event is in debt to the tune of millions and their selectors have difficulty in agreeing on a starting 15; Brian Cody would knock their heads together and set Tommy Walsh on them. The Field of Dreams approach is continually adopted – festivals are erected in the hope that if you build it, they will come.

TRIPPED UP
Last weekend I was at Daytripper in Waterford, a festival that saw a poor enough turnout on Friday for Imelda May, Alabama 3 and Jack L. But hordes of hedonists descended on Saturday and Sunday for Madness, The Coronas and The Stunning. Imelda May and The Stunning also played at Westport Music Festival last weekend, along with Mike Scott, and Imelda has gigs coming up at Live at the Marquee, Galway Arts Festival, the Iveagh Gardens and this coming Sunday at Groove, again featuring support from Jack L and Jerry Fish.

Groove Festival looks like it’s going to be a chilled affair in lush surroundings. One of my favourite Irish bands at the moment, Little Bear, will be there on Saturday. I’m no Eamon Dunphy, but I worry that the more groundhog-dayish the festival circuit gets, the slimmer the chance of all these gigs surviving becomes.

But I’m nothing if not optimistic, so I’m putting a fiver down on a promising treble this weekend: Kinsale Arts, Trim Satire and Kilruderry’s Groove. Hoping for a good ride.