Biggest talking point likely to be Patricia Piccinini’s giant Sky Whale, which created quite a stir when it appeared in Melbourne in 2013 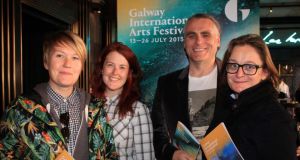 Sculpture from Australia, new plays by Frank McGuinness and Amy Conroy, gigs by Kodaline and The Coronas, talks, trad and street theatre. The 2015 Galway International Arts Festival programme was launched in Dublin last night and according to the festival’s artistic director Paul Fahy, the stage is set for a sizzling celebration of all things art in the City of Tribes from July 13th to 26th.

There will even be a 33m-long flying whale.

Mr Fahy was upbeat about a programme which ranges from a 13-minute “theatre installation” by the playwright Enda Walsh to an online strand inviting people to upload 30-second videos of themselves, talking about their favourite object.

“One thing the festival has always been hugely proud of is that we open our doors to the broadest possible spectrum of audiences,” Mr Fahy said. “We never want to create a barrier between people and the arts.”

He is confident that Frank McGuinness’s The Match Box, Amy Conroy’s Luck Just Kissed You Hello and Beckett’s Lessness, with Olwen Fouere, will pack in the punters.

“Everything is a highlight,” Mr Fahy adds, “but Brett Bailey’s Exhibit B is one of the most powerful pieces of work I’ve ever seen.” Part promenade theatre, part art installation, part political polemic, it examines European colonial policies in Africa and will, he says, “generate a lot of discussion about how we treat migrants in Ireland today.”

The biggest talking point, however, will almost certainly be Patricia Piccinini’s giant Sky Whale, which created quite a stir when it appeared on the skyline in Melbourne in 2013.