Wonder review: An old-fashioned family delight that will leave you in tears 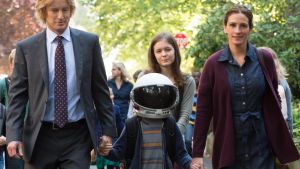 Auggie (Room’s Jacob Tremblay, under prosthetic make-up), a 10-year-old kid with a rare facial disfigurement, lives in Manhattan with his loving parents (Owen Wilson and Julia Roberts) and stoical teenage sister, Via (Izabela Vidovic). Due to numerous surgeries, he has been previously home-schooled by his mother and now must brave the schoolyard for the first time.

“Dear God, please let them be nice to him,” mumbles his mother as he walks through the gates of his new private prep school. Sadly, by the end of the first day, the class bullies are calling him Darth Hideous, then Barf Hideous.

Despite the rough start, over the coming weeks Auggie befriends a boy called Jack and a girl called Summer. Friendship, however, proves to be a complicated and sometimes painful business.

Based on the bestselling 2012 novel by RJ Palacio, Wonder employs a relay narrative so that, by the end of the movie, the viewer has walked in every major character’s shoes. Via plainly adores her brother but understandably feels neglected at home and at school. Jack really likes Auggie but is susceptible to peer pressure. Ditto for Miranda, Via’s former best friend who is now hanging with the cool kids.

Before the studios became entirely fixated on franchises, Hollywood used to make inspiring dramas that ended with standing ovations or children joyfully running toward the cameras. Audiences would leave with life lessons and snivelling into the sleeves. Wonder is just such an old-fashioned delight. Director Stephen Chbosky, who previously adapted The Perks of Being a Wallflower (his own novel) for the screen has fashioned a irresistibly warm, unabashedly humanist family picture.

Your brain may have cynical questions. Like where is the money coming from? Auggie’s family seem to live in a house worth more than most of the Premier League. Or why is everything so glossy and perfect? The school, save for one spoiled brat and his cohorts, is kindly and super-moneyed. It’s run by a wise and witty principal (Mandy Patinkin, channelling Professor Yaffle) and staffed by prepossessing hipsters. Auggie’s parents are Julia Roberts and Owen Wilson, for flip sake.

Your brain is going to shut up. Even if you somehow manage to withstand the mighty screen chemistry of Wilson and Roberts and the cuteness of Tremblay, nothing can counter the emotional clout of Sonia Braga as Via’s late grandma. And did we mention the puppy?