Vin Diesel returns to punch people with a motorbike, go skiing in the jungle and go surfing on a motorbike 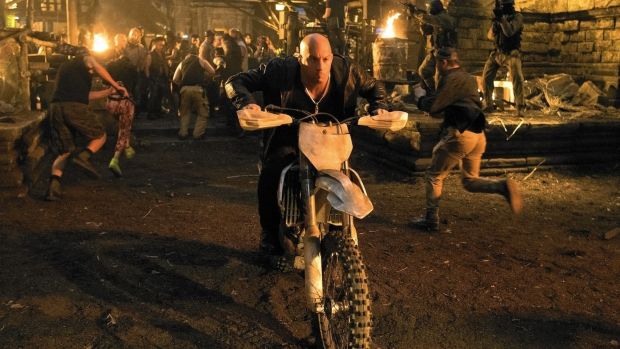 This stuttering sequence got off to a decent, silly start in 2002, followed by an underwhelming sequel with Ice Cube standing in for departing headliner, Diesel. If that wasn’t experimental enough, this third, belated instalment goes full-metal Godard, with a presentation of movie-action tropes without anything like a movie attached. We’re through the looking glass, or at least the windshield glass. Many times over.

Together, the krew’s mission is to look like videogame avatars (but without the sparkling personality of, say, a Space Invader triangle), take orders from Toni Collette’s best cat’s-arse mouth, and retrieve some fiendish device that causes satellites to fall from the sky/allows the government to spy on everyone/ makes tea for Michael Flatley.

At least that’s what we think is going on. To be honest, the film is composed of so many fast cuts, it’s impossible to say for sure. One sequence which begins with Diesel using a motorbike to punch someone and ends with Diesel using the same motorbike as a surfboard, is rendered in such a blur that it’s impossible to determine who is chasing whom. And if it isn’t a crime to chop up the beautiful fight choreography of Donnie Yen into unintelligible ribbons, well, it ought to be.

The dialogue, which is peppered with meme-speak from 2013 – “basic bitch”, “that’s what she said” – does little to guide us through the blur of, well, stuff. Toni Colette, an actor who could undoubtedly deliver a kick-ass King Lear through the medium of sock-puppet, struggles with her ‘words’. But the discourse, does, at least, alert us to the movie’s delight in its own preposterous.

“I’m gonna have to go kamikaze,” says Diesel, as he crashes into something or other. “Don’t do it,” cries his cohort. “It’s suicide.”