Why ‘Fast & Furious’ is bigger than Bond and Star Wars 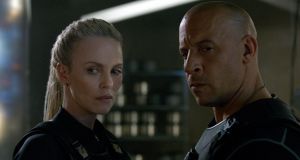 Is it possible that the US trade papers have still to get their heads around the international nature of the box-office business? This weekend, Variety ran an article under the headline “Why Vin Diesel and the Fast and the Furious Franchise Should Eye the Exit Ramp.” There was some talk about how the stories had got a bit stale.

But astonishingly, a large part of the argument was economic. Hang on. Didn’t Fast & Furious 8 (“The Fate of the Furious” in the US) just clock up the highest-grossing opening weekend in the medium’s history? Did I imagine that, with $532 million, the picture just edged ahead of Star Wars: The Force Awakens’ debut? I did not. FF8 got halfway to $1 billion in just three days.

“Here’s the thing, domestically, at least, the “Fast and Furious” series appears to be tapering off,” Variety half explained. “The Fate of the Furious’ $100.2 million launch is a far cry from Furious 7’s $147.2 million bow. It’s the first time that a Fast and Furious film hasn’t improved on the opening of its predecessor since 2006’s Fast and the Furious: Tokyo Drift.”

Sorry? What? It is worth pointing out – as the article goes on to do – that Universal receives about half as much from a dollar earned in China as it does from a dollar earned in the US. But this is still akin to suggesting that the last Ed Sheeran album was a failure because only eight places in the top 10 were occupied by songs culled from its grooves (or wherever songs are housed these days). You may as well invite Star Wars to “eye the exit ramp”.

A most unusual path

The Fast and Furious franchise has vroomed down a most unusual path. The first film, released in 2001, did very nicely indeed without threatening the launch of any new empires. Some sequels fared well. Others fared very well indeed. Then, around about episode five, the franchise went ballistic. The seventh part (its box office, admittedly, boosted by the sad death of star Paul Walker) took $1.5 billion on its way to becoming the sixth highest-grossing film of all time. You can argue about the effects of inflation all you like, but that remains a stunning result.

Given this extraordinary performance, we might reasonably have expected the new film to take a good deal less. Its final total will probably not reach that of its predecessor. But even the Reagan White House would have struggled with the voodoo economics required to frame this week’s figures as the beginning of the end. Fast & Furious 8 was the number one film in each of the more than 60 territories where it opened. Its $190 million haul in China is the biggest ever for an overseas project.

Here’s the statistic that really matters. The “overseas” opening (that’s to say everywhere apart from the US and Canada) is an astonishing 36 per cent ahead of its closest historical rival. Jurassic World took $316 million two years ago. Fast & Furious 7 grabbed $430 million. By way of contrast, Part 8 is merely the 38th largest first-weekend haul ever in the United States. The domestic figures are a near irrelevancy when attempting to assess the new film’s overall financial accomplishments.

The big Hollywood blockbusters now play on a spectrum from outright homers to overseas specialists. In two weeks time we will get a film that, if previous performance is any guide, skews well towards the former class. In 2014, Guardians of the Galaxy accumulated 56 per cent of its takings outside North America. Furious 7 managed 76 per cent in “rest of world”.

This year’s Resident Evil: The Final Chapter – another big hit in China – took an eye-watering 91 per cent abroad. The supposedly all-conquering Star Wars: The Force Awakens grabbed just 54 -per cent out here in non-America.

The Force Awakens may be the biggest film ever in the US, but it was nowhere near being even the biggest 2015 release in China. That title went to a domestic action-comedy Monster Hunt. The most successful US film of that year was – wait for it, wait for it! – a little thing called Fast and Furious 7.

It’s hard to say exactly what plays disproportionately well overseas. Old-school butch movie stars go down well. US comedies very definitely do not. Both Star Trek and Star Wars perform poorly in relative terms. (Though the numbers involved with the latter are so enormous it hardly matters.)

Almost nothing does so well as entities that are both Fast and Furious. The franchise will outlive many of us. It’s currently bigger than James Bond and he’s been around for 50 years.

Get used to it.