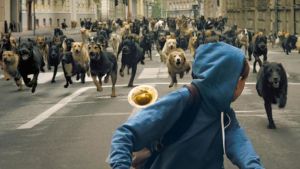 A swerve towards the apocalyptic: Zsófia Psotta in White God

We don’t encounter nearly enough films that begin as one thing and end as something else entirely. If you know anything about Kornél Mundruczó’s extraordinary sixth feature – winner of Un Certain Regard at Cannes 2014 – you will know that it is the film in which dogs take over Budapest. Sure enough, an opening sequence finds young Lili (the excellent Zsófia Psotta) cycling her bike ahead of a huge party of following mongrels. It is a most striking image. But is it merely a dream?

After another hour of White God, the viewer could be forgiven for thinking he or she had been a little misled. The larger part of the film concerns Lili’s adventures after being dumped on her grumpy dad with her much-loved dog Hagen. Nobody will, however, feel they’ve been sold, cough, a pup. There are many hard edges to the story. Dad’s insensitivity borders on mental cruelty. Hagen’s eventual expulsion into Budapest’s canine underworld is genuinely hard to watch. But this is a beautifully calibrated, immaculately acted variation on the sort of story that Disney used to make into live-action dramas 40 years ago. Hagen makes friends with a cheeky stray and falls into the orbit of dog fighters. Lili searches on her bike. What’s the Hungarian for “Hagen Come Home”?

Then, within sight of the credits, the film takes a bracingly jarring swerve towards the apocalyptic. Suggestions of a more politically charged version of Hitchcock’s The Birds flood forth from the city’s dog pound.

The film has much to say about how those at the top of the ladder treat those perceived to be several rungs lower down: animals, children, the socially disadvantaged.

It does so with enormous verve, brooding menace and impressive sincerity.

Big chew toys go the way of Mundruczó, his dog trainers – it is clear that they have been humane throughout – and to young Psotta. The admirable Body, who plays Hagen, shared the Palm Dog prize at Cannes. So, he requires little further celebration. But that won’t prevent us from throwing another bone.