When the Dragon Swallowed the Sun 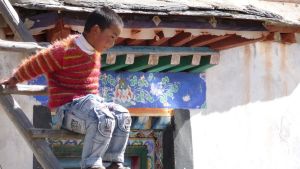 Film Title: When the Dragon Swallowed the Sun

HHHYou will be unsurprised to hear that this documentary on the trials of Tibet does not argue in favour of China’s continued occupation of that country. The Chinese state doesn’t need any such propaganda. It made its case in 1949 with boots and gun barrels. In the intervening years, a kind of complacency has set in outside the region. Other, more recent invasions have elbowed Tibet out of the headlines. Dirk Simon’s film is, thus, a welcome piece of work.

When the Dragon Swallowed the Sun focuses much of its attention on the lead-up to the Olympic games in Beijing. We follow protests at the progression of the torch. We watch Chinese spectators arguing with the activists. A forgivable activation of Godwin’s Law finds the 2008 jamboree being compared to the 1936 games in Berlin.

Elsewhere, a large array of experts – few of them women it should be said – discuss differing attitudes to the campaign against Chinese domination. Students of Irish history will detect parallels to the dispute between Home Rulers and the fledgling Republican movement: the Dalai Lama is open to the notion of limited autonomy within the People’s Republic; other, angrier bodies demand full-scale independence.

The film lucidly explains nuances about the resistance that will be new to most western viewers. It annihilates any serious notion that the Chinese claims are worth taking seriously. It confirms the sheer scale of Tibetan migration to India and beyond.

All that is good. It’s such a shame the picture is so over-cooked in its editing, montage and use of music. The score by Philip Glass, Damien Rice and Thom Yorke (classy line-up) is alright in itself, but it is used far too intrusively. The rapid cutting is slightly nauseating. And the final pounding moments do give in to visual hectoring.

Most viewers won’t need to be pressed into an imaginary corner and buttonholed in this manner. The story is compelling enough to make its case without adornment.

Mubi: online repertory cinema for a handful of change
8