What Men Want: Where’s the heroine who wants to break more balls? 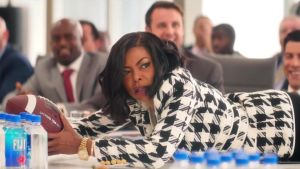 In 2000, Nancy Meyers’ fantasy, What Women Want, imagined a swaggering Mel Gibson could suddenly hear the thoughts of the opposite sex, thereby revealing a workplace and larger world that is no place for a lady.

There’s something irresistible about the idea of a gender and race swapped variation, especially because, well, Mel Gibson.

As What Men Want opens, Ali (Taraji P Henson), a go-getting career gal, is passed up for a long-overdue promotion in favour of one of the lads. So what if she reps for Olympic gold medallists, it’s not as if she has signed a player from the major leagues. Stung, she sets out to nab Jamal Barry (Shane Paul McGhie), the first pick in the NBA draft.

There’s a snag: Jamal’s father is a control freak played by a motor-mouthed Tracy Morgan. And another snag: on a hen’s night out with her friends, a weed-dealing psychic named Sister (Erykah Badu, having a ball) gives Ali some spiked concoction, which leads to a head injury, which leads to the ability to hear men’s thoughts.

Henson falls over, swishes into rooms, dresses fabulously, provides carefully calibrated reaction shots, and is generally game. Throughout a script co-written by Tina Gordon, there are tantalising hints of a better, more socially biting comedy: Ali’s boss whines that he can’t fire her because he might get “crucified by these MeToo-ers” and there is more than one reference to “locker-room talk”.

Instead, we get a loosey-goosey series of subplots: Ali has a touching relationship with her dad (Richard Roundtree), she shares a romantic subplot involving a dashing single-dad bartender (Aldis Hodge), she must appease her female friend squad, and come to recognise the worth of her trusty gay assistant (Josh Brener).

Did we also mention that she also acquires a fake family? Or the sports cameos by basketballers Shaq and Karl-Anthony Towns?

An excellent cast elevates a wacky, crowded script with too few, actual jokes and a disappointingly conventional denouement.

Where’s the movie with the career-minded heroine who overhears the term “ball-breaker” and decides to break more balls? It’ll do well enough for fans of busy fantasy rom-coms with a supernatural twist.