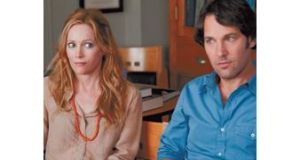 Judd Apatow’s last film, the endless Funny People, looked like a cinematic expression of the director’s mid-life crisis. The good news is that he has moved on.

This Is 40 appears to concern his wife’s mid-life crisis.You will, on every second bus, have seen an image depicting Leslie Mann (the real Mrs Apatow) scowling bitterly at Paul Rudd who, while seated on the lavatory, sourly operates an iPad. We can’t accuse the distributors of misrepresenting the film.

Clocking in at an absurd 133 minutes, this alleged comedy comprises a random arrangement of increasingly embarrassing marital squabbles interspersed with minute outbreaks of worthwhile observational humour. It is, in its quieter way, more pointlessly indulgent than The Matrix Revolutions.

Apatow might argue (though he probably doesn’t) that Rudd is not standing in for the director. Given that the rest of the family – the Apatow children play surly offspring – are all on board, this thesis is hardly worth considering. Couldn’t they have all visited Dr Phil and spared cinemagoers this gruesome unveiling of their emotional innards?

We begin with Ms Mann failing to face up to the arrival of her fifth decade. She lies about her age. She prevaricates about party arrangements. She spends a night on the town. Meanwhile, Rudd – manager of a failing record company – acts out various tired routines from Nick Hornby’s mid-1990s playbook. His father (Albert Brooks), a late convert to in-vitro fertilisation, copes badly with a gang of terrifying blonde children. At the office, Rudd struggles to sell post-punk troubadour Graham Parker (ask your dad, kids) to largely uninterested record buyers.

The film offers ample evidence of Apatow’s skewed take on gender relations. Since he broke ground as a director with the unpretentious, properly funny 40-Year Old Virgin, he has been making the case for men as useless layabouts and women as responsible realists. Sure enough, while Mann does the dirty work about home, Rudd squanders money on trinkets, exercises juvenile fantasies, and trades childish quips with equally rudderless male chums.

On the surface, then, This Is 40 sounds like a feminist piece. The problem, however, is that the women always emerge as aggressive shrews while the men come across like charming adolescents who can’t fight their own silliness. It’s mostly a question of tone. Rudd is permitted a bumbling charm. Mann is armed with shrill barbs, furrowed scowls and ear-piercing shrieks. The misogyny is, perhaps, entirely accidental. But it’s there for all to see.

The shame is that, every now and then, the picture happens upon some excellent lines. Brooks gets some laughs from his extended cameo and Chris O’Dowd, playing Rudd’s second in command, wonders why his boss wasted money on a neon sign. “And it’s inside!” he says, pointing to the illuminated logo. “We know where we work!”

If only Apatow – here delivering a vague sequel to Knocked Up – had managed to incorporate these occasional highlights into something that looked like a film. Some time ago, as one of the talents behind Anchorman: The Legend of Ron Burgundy, Judd managed to knock together outtakes into a self-contained second feature for the DVD release. This Is 40 plays as if it were assembled in similar fashion (during the making of a film nobody sane would want to see).

Is that a word? Never mind.You get the drift.

How do you identify a legitimate government?
5

Music Quiz: Which Britpop star appeared in Harry Potter and the Goblet of Fire?
8