‘There’s so many movies being made . . . It’s completely oversaturated’ 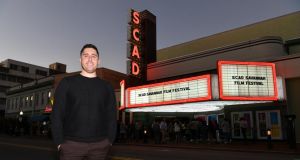 Trey Edward Shults: ‘A lot of people have said to me: ‘oh, it’s about toxic masculinity’. But we didn’t approach it like that.’ Photograph: Dia Dipasupil/Getty Images for SCAD

Waves, the eagerly awaited third film from Trey Edward Shults, opens with a dizzying sequence in which two Florida teenagers –Tyler (Kelvin Harrison Jr) and Alexis (Alexa Demie) – get giddy listening to Animal Collective’s FloriDada, as they drive down a freeway.

It’s a strangely unnerving sequence that required Shults and his cinematographer Drew Daniels to put their camera on an axis in the centre of the vehicle. For all the saturated colour and young love on the screen, there’s a sense of dread and foreboding.

“I didn’t anticipate that reaction,” laughs Shults. “I think what really sets that tone is the spinning camera in the car while Kelvin is driving. For me, that felt like the right visual representation for their relationship for the dynamic and headspace of young love. And also the freedom and the beauty and the chaos of being that age. There’s some very intense stuff with cars. So that reaction makes sense.”

“A lot of people have said to me: oh, it’s about toxic masculinity,” says Shults, who collaborated with star Kelvin Harrison Jr on the script.

“But we didn’t approach it like that. We were just drawing on stuff from their lives and stuff from our fathers’ lives and trying to make something honest. It’s not that simple. There’s beautiful stuff in there too. It’s not like all masculinity in life or in the film is just toxic.”

When Tyler is sidelined by a shoulder injury – one that is worsened by an instinct to train through the pain – and panicked by his girlfriend’s unexpected pregnancy, he becomes dependent on painkillers.

Tyler’s increasingly erratic behaviour leads to the tragedy that bifucates the film. Inspired partly by the structure of Wong Kar-Wai’s Chungking Express, Waves forms a diptych in which the second half of the film, which deals with Emily, her grief, and a blossoming romance with classmate Luke (Lucas Hedges), strikes a very different, conciliatory tone from Tyler’s nervy first-act psychological descent.

“The idea for that structure clicked into place six years ago,” says Shults. “Before that I was just working out the Tyler half of the film. It was still very rough but the basic idea was the idea of the yin and the yang; the two halves making the whole. Writing it, the second part felt like a desperate hug that was needed, especially with writing the initial part. Those two perspectives literally required a dichotomy structure. So it felt really exciting and right.”

Waves marks Shults’s second collaboration with Kelvin Harrison Jr, the young actor who received rave notices for his performance in Luce last year. Harrison previously starred in the director’s second film, It Comes at Night, as a troubled teenager living in seclusion with his parents after an unspecified pandemic has wiped out most of human life.

Shults really does like putting Harrison through hell, it seems.  “I know,” laughs the filmmaker. “The poor kid! We have a lot in common: we’re both from the south; we’re both from upper middle class families, we were both pushed to have a similar drive and work ethic, but for different things.

“I think that plays a role in our relationship. He’s one of my best friends. I love him. He’s a great human being and he’s crazy talented. Hopefully we just get to keep making movies together. With the new film, we were working on it together from the script stage.

“I had said: there’s two possible roles: the brother, who is the main character in the first half or the boyfriend in the second half. I had the broad strokes for the story at that point and he was adamant: he wanted the brother. So then we figured out stuff together. He’s responsible for shaping the whole of this movie. He helped make his own hell!”

Waves is powered along by an omnipresent and incredibly impressive soundtrack. While writing the script, Shults worked into more than 30 tracks by Kanye West, SZA, Kendrick Lamar, Amy Winehouse, Tame Impala and others.

The film features no fewer than six tracks by Frank Ocean and a score composed by Trent Reznor and Atticus Ross. Musical supervisors Meghan Currier and Randall Poster had cautioned that the production budget wouldn’t come close to covering the proposed.

Shults aimed high, sending a personal letter and a rough cut of the film to Ocean, who cleared the songs at a reduced rate. Kanye West proved trickier. The rapper and Christian convert fired the management team handling negotiations before okaying a clean version of I Am A God.

“I still feel incredibly blessed it all worked out,” says Shults. “With Atticus and Trent, I was just so pleased they wanted to work with me. But I didn’t think we actually get all the songs I wanted. I can’t believe the music ended up where it is. I’m still pinching myself.”

The movie functions as a real thing and a fictional thing. Sometimes it’s not just my own life

Shults’s soundtrack, in common with the rest of his oeuvre, is guided by the personal. Aged 10, he picked up a video camera for the first time and shaped a family reunion into an offbeat narrative movie. Krisha, his debut feature, was filmed it in nine days at his mother’s house with a cast almost entirely composed of family and friends.

In 2015, it won both the Grand Jury Prize and the Audience Award at South by Southwest, the John Cassavetes prize at the Independent Film Spirit Awards was nominated for the Nespresso Grand Prize at the Cannes Film Festival, and landed Shults a two-picture deal with A24.

The New York Film Critics Circle named it the best first feature of that year. More impressively, John Waters listed the “hilariously harrowing portrait of a family reunion ruined by an alcoholic relative and too many dogs” as his favourite film.

That has to be a better feeling than winning an Academy Award, right?

“Amen,” says the 31-year-old. “I don’t know how it happened. I guess I believe things are meant to be. Things clicked into place for me and that’s why we’re here now.”

Autobiography has continued to shape Shults’s films. It Comes at Night, his second feature, was handwritten over three days, while Shults was grieving for his estranged father.

In common with the protagonist of Waves, he suffered a shoulder injury in high school that ended his dreams of becoming a wrestler. Emily’s half of the film, meanwhile, draws on an incident from 2011, when Shults visited his dying biological father in Missouri; the pair had not seen each other in almost 20 years.

“It comes from a deeply personal place and then it branches outside of you,” says the writer-director. “The movie functions as a real thing and a fictional thing. Sometimes it’s not just my own life. Sometimes it’s stuff from Kelvin’s life or from my girlfriend’s life or my parents’ lives.

“With Kelvin, when discussing how much we had in common, we’d also note the specific differences. I was trying to hear him and just listen. It was healthy writing. I think it helps that both my parents are therapists. So they are great listeners.”

Is he conscious that his films are very much in keeping with the family business?

“I’m starting to notice that more and more,” he laughs. “It’s all coming back to therapy. I don’t know what’s in the future because, right now, I feel kind of tapped out. But I don’t want to make anything that I don’t believe him with all my heart and my soul.

“There’s so many movies being made and so much stuff in the world. It’s completely oversaturated. What’s the point in adding to all of that unless it’s something you really love?”

Ingenious Ireland: A cornucopia of a book that should be savoured slowly
10

The Great British Bake Off: Who’ll take over from Sandi Toksvig?
Real news has value SUBSCRIBE