The Unbeatables review: foosball comes to life in this lively family film 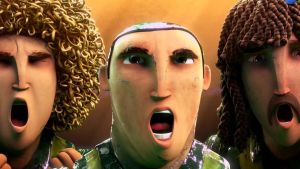 The Unbeatables opens with a replay of 2001: A Space Odyssey’s monolith sequence and, in doing so, announces itself as this year’s most brilliantly double-coded animation.

A lively and consistently funny family film in which a group of table footballers come to life in order to help a small-town foosball champion, the film features a script characterised by cutting remarks concerning a certain footballing body (“You can trust me: I used to work for Fifa”) and a preening footballing superstar villain who in no way bears any similarities to any real-life preening footballing superstar. Unless it’s Cristiano Ronaldo.

The plot pitches ersatz Ronaldo against kind-hearted Amadeo (Rupert Grint), a village boy with mad foosball skills and a madder crush on his longtime pal Lara (Eve Ponsonby). A minor childhood incident in which Amadeo beats a local bully at foosball leaves a lasting impression on the latter, who returns, years later, as Flash (Anthony Head), a pampered soccer icon. Unhappily, with some assistance from his avaricious manager (Stanley Townsend), Flash has already bought up the village and thinks Lara is similarly up for grabs.

Will a double-or-quits wager allow the villagers to stay put? Can Amadeo’s local rabble match Flash’s All-Stars on the pitch?

There are plenty of surprises in this underdog narrative, including the foosball team that comes to life when Amadeo needs them most. Peter Serafinowicz’s Loco lays on the cod-Cantona philosophising, Andrew Knott squabbles with himself as the Breville brothers, and Alex Norton voices the old school, tough-as-boots Scottish captain.

The digital animation, alas, is not all at the Pixar standard, and some of the jokes (including that awful title) get a little lost in translation from the original Spanish screenplay. Still, not many family films can boast an Oscar-winning writer-director at the helm (Juan José Campanella made the Argentinean drama The Secret in Their Eyes) and the voice cast is excellent, even when the lip synch isn’t.

The sad, secret life of Whitney Houston
10 Convert with a lot of convincing yet to do
Real news has value SUBSCRIBE