The Tale of Princess Kaguya: a masterly feast for the eyes 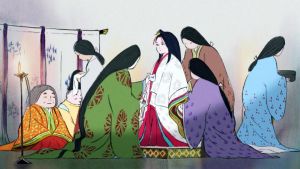 Film Title: The Tale of The Princess Kaguya

When Tomm Moore’s Song of the Sea received its Oscar nomination, there was much chatter about that small film occupying the same corral as studio pictures such as Big Hero 6, but the Irish animator seemed more excited about competing against a film by Japanese master Isao Takahata. The director of Grave of the Fireflies – one of the greatest anti-war films – has, for his first feature in 14 years, turned to the Japanese folk tale The Tale of the Bamboo Cutter.

It’s a resonant yarn, fuelled with magic and wonder, that drifts inevitably towards a satisfactorily sad ending. One fantastic day, a woodsman and his wife discover a baby within a bamboo shoot. The couple raise the child – who grows superhumanly quickly – to be a class of princess and, confirmed in their ambitions by the discovery of further treasures among the bamboo, subsequently move hopefully to the big city. Training her in the ways of the highborn, a governess only serves to reveal the emptiness of social strictures.

There is much of interest here about the traditions of an older Japan. Like so much folk cinema by Kenji Mizoguchi, Takahata’s film uses dusty stories to reveal timeless prejudices and foolishness.

The Tale of Princess Kaguya is, however, most notable for its extraordinary visuals. Viewers used to the bold lines and brash colours of Hayao Miyazaki’s films – Takahata also works under the Studio Ghibli banner – will be refreshed by the more painterly work in this gorgeous film, which maintains the dainty style he seemed to perfect in My Neighbours the Yamadas. The impression is of a continuous series of watercolours, similar to the narrative scroll revealed to Kaguya in a key scene.

Formal discipline and creative restraint replace the bash and flash we encounter in most western animation (and, for that matter, the majority of Japanese animes that secure international distribution).

The English language dub is perfectly fine, but the subtitled version, available in selected cinemas, retains more of the proper tone. Either way this is a film that invites and delivers total immersion.