Everything about The Silent Storm suggests a screenplay was written entirely IN CAPITAL LETTERS. No “r” goes unrolled, no piece of furniture is unpounded 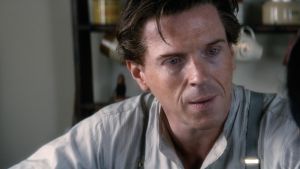 Films are labour-intensive affairs. Any number of seemingly insignificant calibrations can be off and suddenly everything is wrong. A case in point is The Silent Storm, one of those projects that manages to make its normally reliable stars sound like busted kazoos.

Damien Lewis is Balor, a minister of the old school, dispensing fire and brimstone toward the locals and his pale, sat-upon wife, Aislin (Andrea Riseborough), who washed up on the shores of their remote Scottish island.

That origin story does not come close to explaining Aislin’s bizarre accent, but there is much that does not add up here. Why would such a fanatic marry a woman who refuses to attend his beloved church and who, as a practicing herbalist, is, to his mind, practically a demonologist?

As his flock prepares to fly away, the increasingly demented Balor draws comfort from wife bullying – his own and sometimes other people’s wives, such as a browbeaten Kate Dickie, who is scolded about duty when she attempts to complain about her alcoholic brute husband.

“You are a failed wife and a failed mother and you will rot in the bowels of hell,” he tells Aislin in one of their more tender moments together. The unhappy couple have already lost a child in a ludicrously overheated opening sequence.

Balor, who routinely mentions his service during the war (presumably second) is in the middle of a heated domestic dispute when a young mainlander named Fionn (Ross Anderson) arrives on their doorstep. Well this can only turn out well.

Anderson’s performance retains a degree of nuance, while his more experienced co-stars sound like a cannons mounted before megaphones. It’s hardly their fault. Everything about The Silent Storm suggests a screenplay was written entirely IN CAPITAL LETTERS. No “r” goes unrolled, no piece of furniture is unpounded.

Joanna Hogg’s regular director of photography Ed Rutherford seeks out sparse, windswept tableaux, but one suspects that the only reason this is playing in cinemas is that Barbara Broccoli, the veteran Bond mogul, is listed as an executive producer. Fishy.