The Red Turtle review: another masterful turn from Studio Ghibli 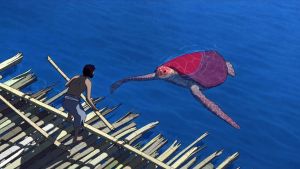 It could not be easily mistaken for the work of Ghibli’s master Hayao Miyazaki. The film’s magic is of a less exuberant stripe. (Indeed, Dudok de Wit’s work could not be mistaken for any obvious predecessor.) But the damp washes and elegant story are right up to Ghibli’s consistently high standard. The picture’s baffling swerves do nothing to deflate its final emotional payoff.

We begin with a castaway being washed by thundering waves towards the shore of an isolated island. Or is he? It is giving nothing away to say it is always possible with such magical plotlines that the initial peril has killed the hero stone dead and he has gone on to live a post-mortem dream. Nothing here supports much that notion. It’s just an idea.

Anyway, the picture goes on to send our hero through the usual Crusoe hoops. He investigates the island. He falls down a crevice and finds an escape route to the sea. He sees a barrel, but when, after much effort, he secure it, the damn thing proves to be empty.

His dreams take him in different directions. One positions a string quartet on the beach. Another builds a jetty and gifts him the power of flight. All the while, he continues to build rafts, but, each time he makes it to sea, something knocks his vessel to matchsticks. It turns out to be the large titular turtle of the title. The man’s response sets in motion a process that somehow delivers a human companion to the island.

The director has thought very hard about the island and, with great economy, manages to fully communicate its topography to the viewer. Here is the gap that must be leapt. Here is the rich green forest. By the close, you half think you could act as a tour guide to any passing visitors.

The film’s greatest supporting players are a cast of crabs that, without becoming fully anthropomorphic, develop characters to savour and to feel concern for. Dudok de Wit lavishes attention on all the animals. Birds rush past in joyous swoops. The turtles take on the quality of protectors.

All this is depicted in beautiful animation whose Japanese influences are unmistakable. One can almost see the brushstrokes that have cast the watercolour-like shades across the seductive screen. No frame is too busy. If only shades of green are required, then that is the only colour we will see. This is a very balanced class of loveliness.

The Red Turtle is a film about old-fashioned notions such as being at one with the natural world. The man, his wife and son reach such a state of harmony that they can count on nature to help them heal after it has one of its characteristic violent convulsions.

What the picture says about family dynamics is harder to pin down. If we were being cruel we could remark that comfort and relief seems to come from the acquisition of a nuclear family. Something rather similar happened, remember, in the cheesy, bourgeois Tarzan films. Man, Wife and Boy would be the perfect neighbours – if there were any neighbours. But perhaps their Platonic lack of character is on purpose. Maybe these are the idealised dreams of a family that the lonely man yearns for before going insane and imagining them real. Or maybe he’s dead along. Did we mention that?

Never mind that The Red Turtle is a truly delightful film that does its parent company proud. Hugely recommended.